USMNT vs Mexico for the inaugural Nations League final. Exciting is an understatement. I expected no less from this North American rivalry, and the game gave everything one could have ever wanted. The game went into extra time and plenty of added time and ended 3-2 with a dramatic, nail-biting ending.

Mexico struck first in the first minute (72 seconds) with a Jesus Corona goal but was quickly met by a Gio Reyna goal in the 27th minute. The game was a stalemate until Mexico took the lead again by a strong left-footed strike by Diego Lainez but was again met with a fast turnaround three minutes later by Weston McKennie’s head off a corner kick. Pulisic and the USMNT took the lead well into extra time in a penalty, and a brilliant Ethan Horvath penalty save kept the USMNT in first and gave the inaugural Nations League trophy to the US.

Disappointing First Half for the US

The USMNT came out in a debut 5-3-2 with DeAndre Yedlin, and Tim Ream added into the defensive line. Unfortunately, the defense again proved to be a liability to the US’s game. The first goal was an incredibly sloppy mistake by Mark McKenzie that was more indicative of an amateur than a professional. He continued to make mistakes on the ball and allowed turns far too easily.

All of the defensive line should be displeased with their performance as well; this was not a game McKenzie made worrisome. Tim Ream was outpaced and outclassed; John Brooks did not maintain a cohesive unit of five; DeAndre Yedlin was undisciplined. The defensive line has always been an issue for the US, and it looks like it will continue to be.

The first half was well in favor of Mexico, who looked faster and more composed on the ball. They kept up the pressure and pressed the US high, who very obviously struggled to deal with it. The US pressed as well and created good opportunities themselves but struggled to chain together really decent attacks in the first 45 minutes. 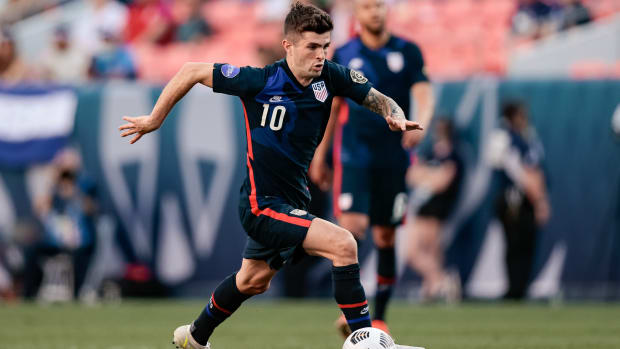 USMNT vs Mexico for the inaugural Nations League final. Exciting is an understatement. I expected no less from this North American rivalry, and the game gave everything one could have ever wanted.

An Exciting Finish to a Fairly Dull Game

This was a championship game through and through, and it ended in fitting fashion. Kudos to the referee for handling the ending so well and making the correct decisions on both penalties despite plenty of pressure. Pulisic belongs in the captain armband after placing the sweetest penalty perfectly in the top right. Nobody could save that.

The energy he displayed after that penalty was not apparent throughout most of the game, and I would have liked to see him a bit more involved in the game. I’m sure it’s difficult for him to find space with other team’s defensive preparations definitely targeting him, but he should be working through that and managing to find himself on the ball more often.

Ethan Horvath deserves a statue outside of Empower Field after that save. It was a horrendous penalty by Guardado, but a really technical save on Horvath’s part to maintain a strong wrist and parry it to safety. Kudos to Horvath, who definitely played better than Steffen did before he came out with what looked to be a muscle injury in his left leg. Berhalter may have a tougher decision to make in the goalkeeper room.

Shoutout to McKennie and Reyna

These two are definitely deserving of some praise above the negativity I am undoubtedly spewing at the USMNT, who overall played a fantastic Nations League tournament. McKennie, quite literally, rose to the occasion on set pieces. He has no business winning as many offensive headers that he did off of corner kicks. His goal came off his third straight header off a corner. What an asset he is if he continues to show that aggression in the air.

And Reyna. He played box to box. He never made any wildly impressive challenges in the defensive third, but he tracked back an impressive distance consistently and made it just a little bit harder for Mexico. Not to mention he is dicey in the final third. I don’t see much pace in him, but he finds a way to get by on a consistent basis. He was rewarded in the right place at the right time for his goal, and it is most certainly a well-deserved one.

Jack Cohen
Jack Cohen is an avid sports watcher and writer. After a collegiate career playing Soccer, he remains closely intertwined with the sport, following all major domestic leagues and international competitions. He is a New York sports fan through and through, sporting the uncommon combo of NYCFC, Nets, Jets, and the Yankees. He is forever grateful to the Jets for teaching him how to have unconditional optimism in the face of consistent disappointment.
You might also like
Soccer pickssports bettingUSMNTSoccer
MORE
Read More
13

Leonard Leads LA Past the Mavericks: Luka Drops 46 Points in Loss
Next

A Closer Look at the First Round of 2021 NBA Playoffs: The Numbers Don’...
Top US Sportsbooks