The New York Red Bulls will host the Philadelphia Union for the second time this season at Red Bull Arena this Thursday night.

HISTORY: Philadelphia leads the all-time series 20-14-4, and they’ve won the last four meetings, including a 1-0 victory back in May.

New York: Tale of the Tape

New York Red Bulls (5-1-5) kicked off the vital month of July with a late 2-1 victory over Orlando City. The Red Bulls got off to a fast start after Cristian Casseres Jr. gave them a one-goal lead early within the first ten minutes. They went into the locker room ahead, but an equalizer from Orlando City’s Chris Mueller knotted things up at 1. The Red Bulls continued to attack, and their persistence paid off, as Fabio would score the game-winner in the 79′. They outshot Orlando City and defeated them for the second time this season, picking up their first road victory of the season. New York will now look to make it five straight wins at home when they welcome the Union to town.

Gerber Struber will likely line up in the 4-4-2 again with Carlos Coronel between the sticks. The Brazilian keeper has recorded four clean sheets on his loan spell from Red Bull Salzburg. He’ll be covered by the center-back pairing of Sean Nealis and Thomas Edwards, with Kyle Duncan and John Tolkin on the outside. Duncan has followed his breakout 2020 season well so far, and he leads New York in tackles with 36.

Frankie Amaya and Cameron Harper will join team captain Sean Davis in the midfield. Davis has looked strong through the first half of his seventh season, and he’s set the lead the Red Bulls in passes for the fourth year in a row. He’ll look to create chances for the attacking-minded trio of the Venezuelan international Cristian Casseres Jr., former Celtic forward Patryk Klimala, and Fabio.

Casseres Jr. found the back of the net in his return from Copa America, and he leads the team in goals (4). Klimala dished out a pair of assists in the victory over Orlando City, bringing his season total to four. Fabio has been effective so far in his loan spell from Oeste. He leads the team in shots and assists (5), and he netted the winning goal last weekend. 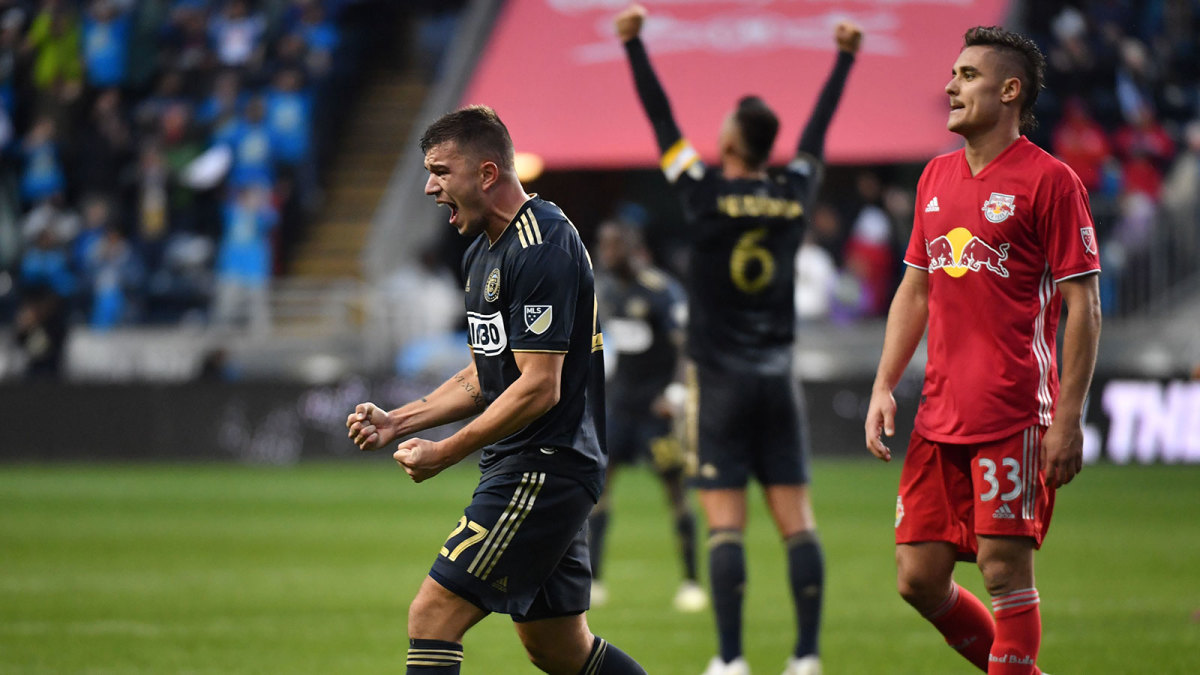 The New York Red Bulls will host the Philadelphia Union for the second time this season at Red Bull Arena this Thursday night.

Philadelphia: Tale of the Tape

Prior to dropping their last outing to Nashville SC, Philadelphia Union (5-4-3) had been unbeaten since their season opener. Philadelphia has been consistent offensively, and they’ve recorded five clean sheets through the first two months of the season. They had a pair of golden chances to extend their unbeaten streak last weekend, but they failed to overcome an early goal from Nashville’s C.J. Sapong.

Seventh-year manager Jim Curtin will likely deploy a 4-3-1-2 against New York. 2x MLS Goalkeeper of the Year Andre Blake will make his 13th start of the year. He’s having another all-star caliber season in goal, and he’s kept six sheets clean. He’ll be blanketed by the center-back pairings in the league in Collin Glesnes, and Jack Elliot with Kai Wagner and Olivier Mbaizo hover in the flanks.

Wagner leads the team in tackles (27), while Elliot and Glesnes have recorded 21 and 20, respectively. Elliot, Glesnes, Collin Glesnes has been a stud in the back. Philly’s last five wins have been all been shutouts, so expect strong defensive play here on the road as they look to end the Red Bulls’ home streak.

Leon Flach will provide an extra line of defense, while team captain Alejandro Bedova will push forward with the attacking line. Jamiro Monteiro will look to continue his magical season. The former Metz midfielder has scored a pair of goals, and he leads Philly in assists (4). Cory Burke and Kacper Przybylko should start up top, with Sergio Santos an option to feature as well. All three have found the back of the net this season, while Burke leads the team with four goals.

Fabio is enjoying his first season in the MLS. After dishing out four assists in his first three appearances, he’s carved out a role as a potent attacking threat. He will need to be clinical against such a tough backline, but after securing the win for New York last week, look for him to follow that up with a solid outing at home.

The 2x MLS All-Star has been in excellent form, and while goal support has grown stagnant during a few matches, they will always be a threat with him in goal. He’s only given up more than two goals twice, and with the New York offense clicking right now, he’ll need to play mistake-free football if the Union want to pick up the win here.

New York’s momentum at home will be tough to look away from. Philly has the upper hand defensively, and they may just have the best player on the field in Jamiro Monteiro as well. His midfield battle with Sean Davis is going to be key in this game. Both teams could score, but the Union could go in and stifle the Red Bulls tonite. Betting against New York during this home stretch feels risky, but take Philadelphia to win a defensive game and potentially shut out their opponent. Bet on the Union and take their +1 spread.

Corey Ghee
Avid sports writer and bettor. VCU Alum. Dodgers Fan. Cameron Crazy. Longhorn Football. James Harden Advocate. 4x Fantasy Football Champion. I love the game of basketball but I serve a diverse perspective of sports, from court to field to pitch to diamond to ice to clay. There’s always a decision, and a profit to be made. I’m here to help and learn along the way. Spreads, lines, totals, let’s win together.
You might also like
Betting PickMLS PicksNew York Red BullsPhiladelphia UnionSoccer
MORE
Read More
42