The game between Italy vs Switzerland will wrap up Day 5 of Euro 2020 action. Italy can jump out to a massive lead atop Group A with a win over the Swiss here.

Switzerland: Tale of the Tape

Projected XI: Sommer; Elvedi, Schär, Akanji; Mbabu, Zakaria, Xhaka, Rodríguez; Shaqiri; Embolo, Seferović
Switzerland entered Euro 2020‘s carrying a five-match unbeaten streak, but a draw with Wales in the opener may have brought a sense of urgency to this game.

Vladimir Petkovic will trot out the three-man central defensive unit of Newcastle’s Fabian Schar, BVB’s Manuel Akanji, and Monchendladbach’s Nico Elvedi. The Swiss kept work light for goalkeeper Yann Sommer, as they only allowed one shot on target. Wolfsburg’s Kevin Mbabu and Torino’s Ricardo Rodriguez will be the two wing-backs, and the duo’s distribution gave the Welsh trouble in the opener.

Swiss captain Granit Xhaka and Atalanta man Remo Freuler were stellar in the opener, as Switzerland won the possession arrow (65/35) and frequently created chances with swift transitions. Xherdan Shaqiri didn’t play a lot of club football this season, but his creativity and speed are still very much valuable to the Swiss. Shaqiri was in peak form at the 2018 World Cup, and he distributed on the Swiss’ first goal of the tournament against Wales.

Finally, the strike partnership will be formed by Benfica’s Haris Seferovic and Mönchengladbach’s Breel Embolo. Seferovic has been a full-time international since 2013, and after netting 22 goals for Benfica, he’ll make his 75th cap for the Swiss. Embolo scored in the opener, and he’ll be making his 43rd cap. 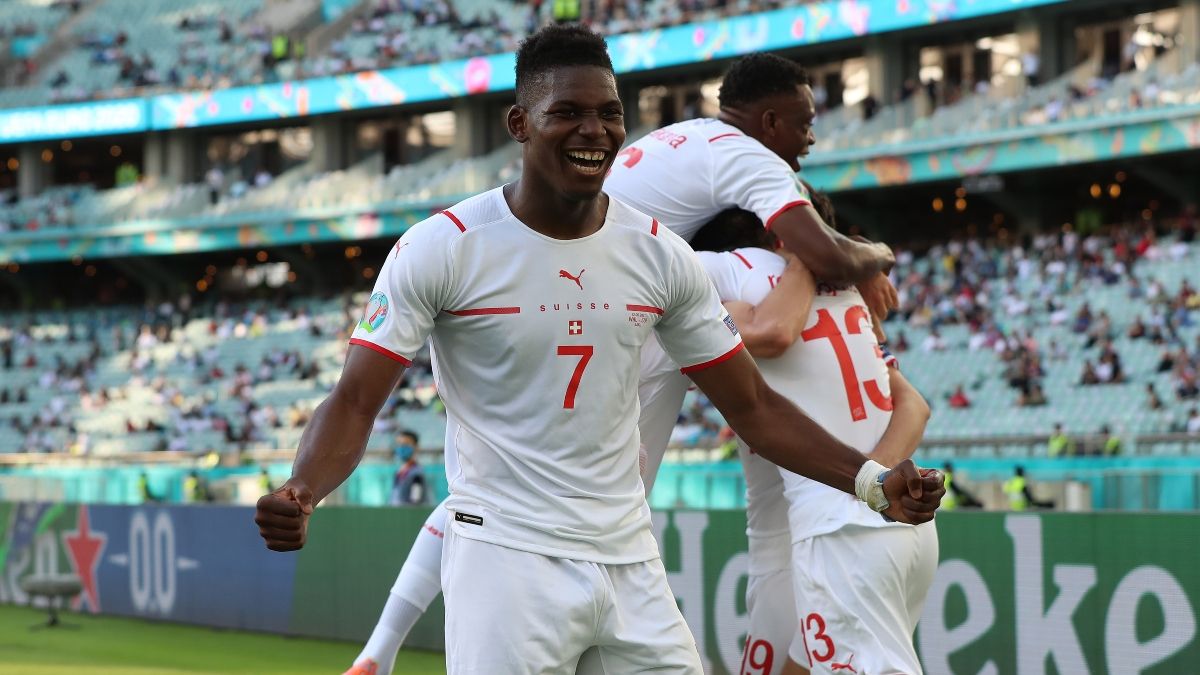 The game between Italy vs Switzerland will wrap up Day 5 of Euro 2020 action. Italy can jump out to a massive lead atop Group A with a win over the Swiss.

After uncharacteristically missing the 2018 World Cup, Italy opened the tournament with a dominating 3-0 over Turkey. The Italians were shut out in the first half before an own goal gave them the cushion they needed to take off. They’re winners of their last seven games, and they look like the favorites to come out of Group A.

Annually, Italy’s midfield and defense have been the strengths of the team, but they’re as strong as ever up front this summer. Ciro Immobile and Lorenzo Insigne headline a talented group of forwards. Immobile is coming off of another stellar campaign with Lazio, netting 25 goals and garnering another trip to Europa League. Insigne is back for his third tournament with the national team, and the Napoli striker scored three goals over qualifying action.

Both Italian Serie A studs found the back of the net in the win over turkey, and they will look to give the Swiss back line some trouble. Sassuolo stud Domenico Berardi has scored in four of his past five caps. Torino captain Andrea Belotti and Juventus’ forward Federico Bernardeschi remain deployable options for Italia.

Marco Verrati headlines a solid midfield, but the PSG man is still out with injury. Upon return, he’ll be joined by Chelsea‘s Jorginho and Inter’s Nicolo Barella. Jorginho is coming off of a magical Champions’ winning campaign, and the deep-lying playmaker served as the glue for Thomas Tuchel’s turnaround at Chelsea this season. Barella featured and helped Inter capture the Seria A crown in his first year with the club. Sassuolo’s Manuel Locatelli will start in Verrati’s slot again.

The back line will miss a pair of familiar faces, but it also returns a vital duo. Gigi Buffon and Andrea Barzagli have retired from international play, but the longtime centre back pairing of Giorgio Chiellini and Leonardo Bonucci returns for one final run. Two-thirds of the infamous Italy Wall, Chiellini, and Bonucci will bring brute and leadership to a young, talented squad. The Juventus pairing has over 250 caps combined. Roma’s Leonardo Spinazzola and PSG’s Alessandro Florenzi will join them on the outside, while the former was named Man of the Match for his defensive mastery against Turkey. Gigi Donnarumma will make his 27th cap in goal.

The Swiss speedster made his presence felt immediately in the opener, and his runs will be key if Switzerland wants to steal three points from Italy. He’s shown up big in these spots before.

Lazio’s second all-time leading scorer will finally get his shot to be the guy this summer. For years Mario Ballotelli, Antonio Cassano, and Graziano Pelle stood in his path, but it’s his time now. After scoring nearly 100 goals in three years, Immobile may be the best forward Italia has trotted out in a long time. He found the back of the net in the opener and nearly generated another.

While Italy was dominant on both sides of the ball against Turkey in the opener, Switzerland will present a much tougher challenge. This match-up has upset potential, and Xhaka and Shaqiri must play huge if the Swiss want to steal three points here. Italy looks like contenders, and with a win here, with just Wales remaining, they are bound to advance to the next round. This one won’t come easy, but Italy should pick up the three points here. Bet on Italy to win, while both teams do have a chance to score.

Corey Ghee
Avid sports writer and bettor. VCU Alum. Dodgers Fan. Cameron Crazy. Longhorn Football. James Harden Advocate. 4x Fantasy Football Champion. I love the game of basketball but I serve a diverse perspective of sports, from court to field to pitch to diamond to ice to clay. There’s always a decision, and a profit to be made. I’m here to help and learn along the way. Spreads, lines, totals, let’s win together.
You might also like
euro 2020Soccer pickssports bettingSoccer
MORE
Read More
10

Rays vs White Sox Prediction
Next