How Is This Italian Euro 2020 Side So Strong? Italy’s most recent major tournament, prior to the Euro 2020, was the 2016 Euros. They failed to qualify for the World Cup in 2018. Now, they are one of the best teams in the Euros, arguably the world, and have not lost a game in 32 total games. In this tournament, they have a goal difference of eight. In all five games that they played, which were all wins, they have 11 goals. They only gave up two.

So what is the secret to their success? Where did the Italian team come from, and what are they doing in this tournament that is so special? The Azzurri can’t seem to be beaten, but why not? They have faced tough opponents. A victory against Belgium, the #1 team according to FIFA, most recently caps off a campaign that saw victories against two strong sides in Austria and Switzerland, among many others.

Stalwart Defense that is Offensive

Italy wanted to come into this tournament and prove to the world they could participate in the modern world of football; they wanted to prove they fit in with the best of them. They are doing just that, and it all starts with their defense.

Chiellini and Bonucci are dinosaurs. They have played together for ages and have well over 200 caps combined. The experience that those two bring to the Italian defense is huge. The communication, the composure, the tempo all starts from those two center backs. Chiellini and Bonucci embody the veteran. Not to mention, they are still moving quite well for 37-year and 34-year olds. 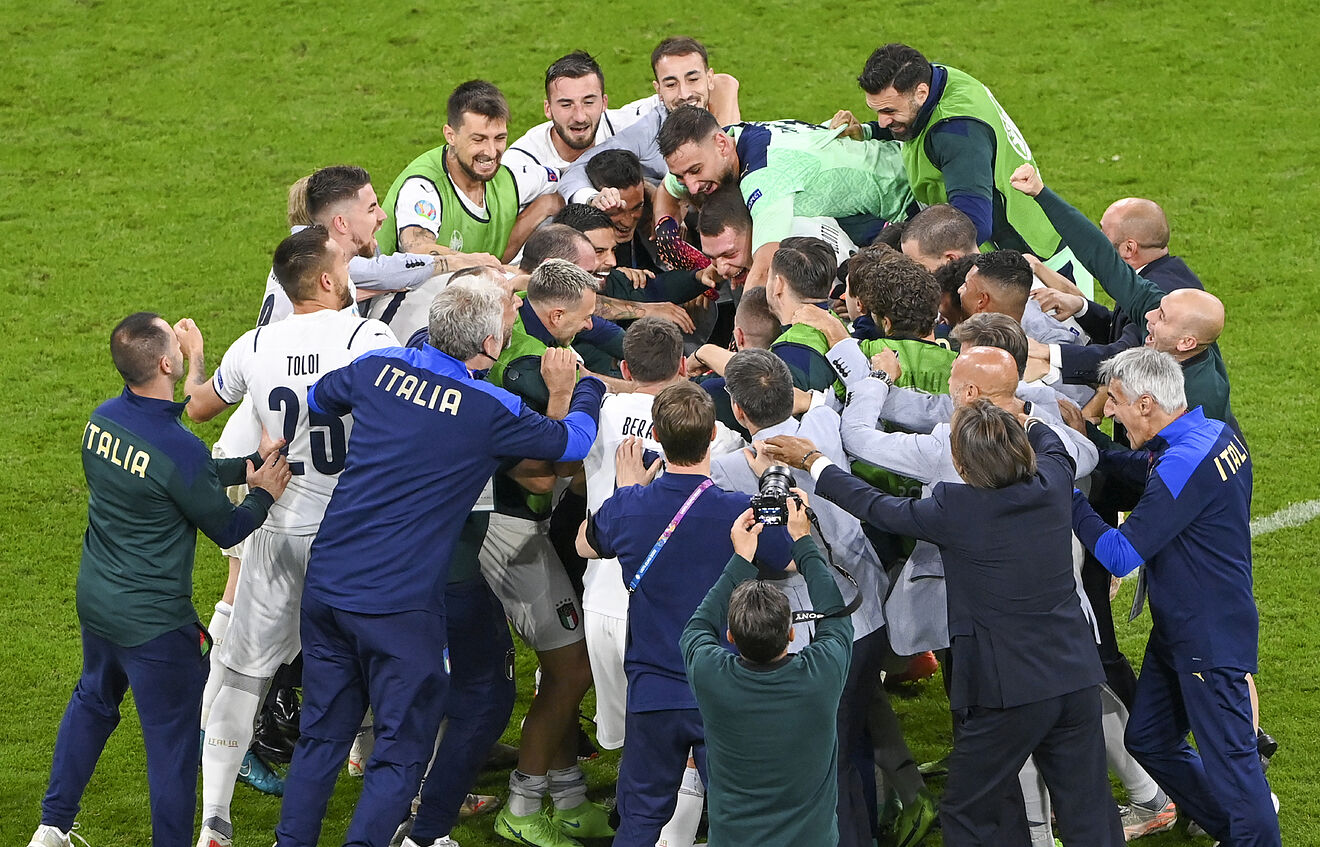 Italy failed to qualify for the World Cup in 2018. Now, they are one of the best teams in the Euros, arguably the world, and have not lost a game in 32 total games

And then Spinazzola — the name everybody has been talking about this tournament. He has two man-of-the-match awards from left back. Spinazzola is becoming a role model for all left backs, and his games at this tournament should become a film study for aspiring professional left backs. His positioning is so fluid. He does not run up and down the sideline like a lot of wing backs do. He floats into the midfield, and he makes runs into the center as he carries the ball into space. He makes the job of the opposition difficult because he is unpredictable.

But he isn’t unpredictable just to be unpredictable. He is really smart off the ball, providing the Italian attack with a lot of nuances. Not to mention the man can run. He tracks back so well. Just against Belgium, he saved a goal against Lukaku from a really strong little piece of defending. While Chiellini and Bonucci provide the reliable wall, Spinazzola detaches and attaches back at a whim, but he is never found missing.

Italy shoots the most per possession out of any team in the Euro 2020 final eight. While ESPN wrote an article that most of these are bad shots, I think it doesn’t matter. This has been a tournament where teams cannot score goals for the life of them. And why? Nobody is shooting. Nobody can get into decent attacking positions, and nobody can score, except for Italy. Italy has done such a fantastic job of getting themselves into scoring positions and then finishing their attacks.

Sometimes it’s not a great take, but sometimes it is. And bad takes keep the goalie honest. Bad shots can have a purpose. If Immobile turns from 20-yards away and beams a shot that just grazes the top corner, then that goalie will forever be nervous. That defense will keep stepping up, and space will open in the back.

This Italian team is performing well on all cylinders. And if they continue to do this, I can’t see who can stop them.

Jack Cohen
Jack Cohen is an avid sports watcher and writer. After a collegiate career playing Soccer, he remains closely intertwined with the sport, following all major domestic leagues and international competitions. He is a New York sports fan through and through, sporting the uncommon combo of NYCFC, Nets, Jets, and the Yankees. He is forever grateful to the Jets for teaching him how to have unconditional optimism in the face of consistent disappointment.
You might also like
euro 2020italySoccer picksSoccer
MORE
Read More
8