Game 4 of the Stanley Cup Finals between the Tampa Bay Lightning and Montreal Canadiens is set for an 8 p.m. ET puck drop. The Lightning will look to close out the series in Montreal Monday evening as they look for their 4th consecutive win over the Canadiens and a 2nd straight season as the Stanley Cup champions. Do the Canadiens have any more fight in them in preventing the Lightning from reaching such a significant milestone?

Below, I will be sharing with you my picks and predictions for when the Lightning take the ice seeking a sweep in Montreal.

With the potential of one game remaining in the Stanley Cup Finals, the Tampa Bay Lightning have found the perfect balance of stellar goaltending, strong defense, and high operating offense. Outscoring the Montreal Canadiens 14-5 throughout the first three games of the series has led the Lightning to take a commanding 3-0 lead into game 4.

Nikita Kucherov was ruled out for the 2020-21 NHL regular season. Playoffs come around, and he has had no problem in reminding players around the league as well as the audience surrounding that he may be the most valuable asset to the best team in the league.

In this year’s playoffs, Kucherov has played in all 21 games, gathering a total of 32 points spread out through eight goals and 24 assists. Boasting a +/- of (+6), Kucherov brings a lot of attention his way opening up time and space for one of his linemates to create an opportunity. 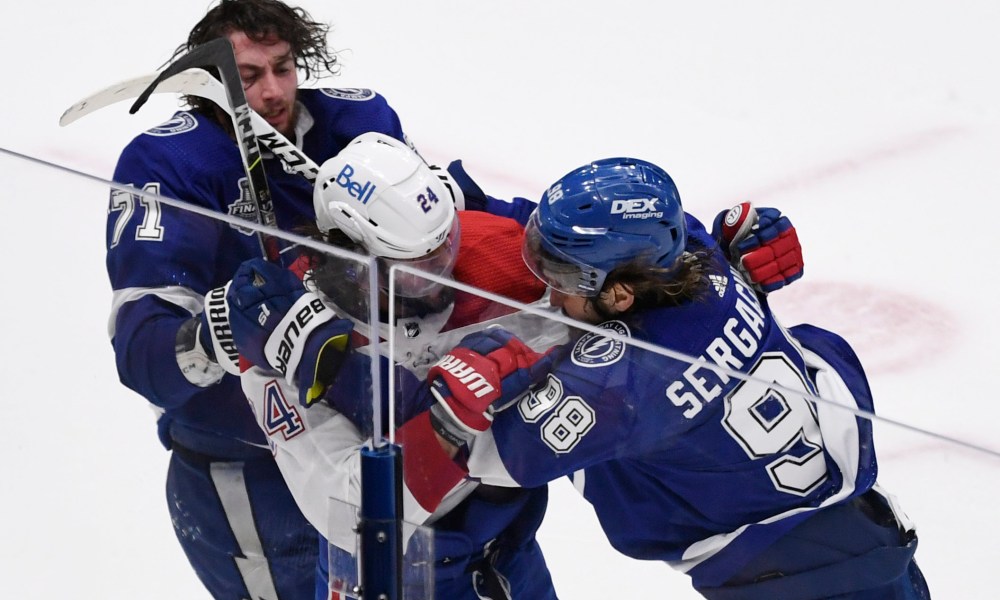 The Tampa Bay Lightning will look to close out the series in Montreal on Game 4 Monday evening as they look for their 4th consecutive win over the Canadiens and a 2nd straight season as the Stanley Cup champions.

Kucherov isn’t the only member of the Lightning that has picked up their play tremendously in the playoffs. In fact, there’s no way the Lightning would be where they are today if it weren’t for their 26-year-old star goaltender Andrei Vasilevskiy. As crucial as any player on the ice, Vasilevskiy holds a 15-6 overall record this postseason while posting a .938 save percentage and a 1.94 goals given up per game.

Given those two pieces of information, no wonder the Lightning have found such great success in this year’s postseason run they put together. But that’s just highlighting the Lightning’s star on offense and goalie between the pipes, so how about their defense?

I have two words for you: Victor Hedman. Debatably the best defenseman in the league, standing at 6’6’’, the Swedish 30-year-old has the ability to poke-check the puck off your stick and beat you wide with his speed. Collecting 18 points in the Lightning’s 21 games played this postseason is one of the many reasons the Lightning can depend on their big man to protect the net while producing on the offensive end.

Tampa Mayor Jane Castor doesn’t want the Tampa Bay Lightning to win the Stanley Cup in Montreal. Instead, she’d rather her city’s team go a little easy in Montreal and return to Tampa for game 5 where they can win it or lose.

“What we would like is for the Lightning to take it a little bit easy, to give the Canadiens just the smallest break, allow them to win one at home, and then bring it back to the Amalie Arena for the final and winning of the Stanley Cup. We don’t want to get ahead of ourselves. But they are playing some amazing, amazing hockey.”

It seems pretty clear to me that Mayor Jane Castor doesn’t watch too many sports, or she’d be aware of the fact that you don’t hand other teams the win, especially in the Stanley Cup Finals, when the goal you’ve been trying to reach all year lies directly in front of you. Lightning coach Jon Cooper may agree with me, saying, “That thought of winning at home versus the sweep will never sneak into our locker room. It’s about winning. It’s not about where you win. And that’s all we care about.”

Look for the Lightning to keep things rolling in Montreal Monday night as they look to hoist the Stanley Cup for a second straight season.

Aaron Aboodi
Born in Scarsdale, New York -- he grew up a big Rangers, Yankees, Giants, and Knicks fan. Confident in his knowledge of all sports, but considers himself an expert in the NHL, MLB and NFL. He participated in varsity hockey and golf throughout his four years of high school. Currently enrolled at the University of Miami.
You might also like
Betting PickTampa Bay LightningNHL
MORE
Read More
1 Countdown to Game Greece 2021: Last Week to Save on Tickets
Next