After two thrilling games to start the series, the Vegas Golden Knights head to Minneapolis to take on the Minnesota Wild in Game 3 of the best of 7 series. The first Golden Knights vs Wild game went to overtime and saw Minnesota score the only goal of the game to take a 1-0 lead in the series. Then, in Game 2, the Golden Knights were able to score three goals and win the game 3-1.

Now it’s turned into a best of 5 series from here on out, with the winner taking on the winner of the Colorado Avalanche/St. Louis Blues series. Colorado is in command of that series 2-0. The Golden Knights are favored in this game at -120, and the total goals is set at 5.5 goals.

Marc-Andre Fleury is no doubt a boss between the pipes. The veteran 36-year-old was brilliant in the Game 2 win. Fleury, who was drafted back in 2003, saved 34 shots after saving 29 the previous game. As the regular season finished up, he was elite with wins in his 9 starts. On the season, he finished with a 26-10-0 record and 6 shutouts.

Alex Tuch was the goal-scoring hero in Game 1. He scored the second and third goals of the game after Jonathan Marchessault tied the game in the second period. Tuch finished the regular season with 33 points, including 18 goals and 15 assists. Mark Stone was the top point guy for the Knights with 21 goals and 40 assists.

Vegas was one of the top goal-scoring teams in all of the National Hockey League during the regular season. They scored 3.39 goals per game and put up nearly 33 shots per game. The defense was what had them finish near the top of the NHL standings. The Golden Knights allowed just 2.18 goals per game. 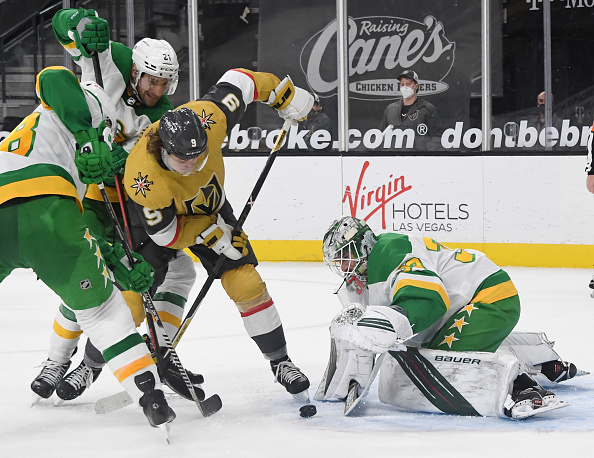 The Vegas Golden Knights have never won a game in regulation in Minnesota before. The Wild obviously hope that continues and they can keep Vegas on their heels. Minnesota won May 3rd, 6-5 at home, and then Vegas won in overtime the next game. When these two teams played in March, Minnesota won both games at home.

Minnesota scored 3.21 goals per game, which ranked 8th in the National Hockey League. Defensively, the Wild allowed 2.84 goals per game, which was right in the middle of the pack during the regular season. Minnesota was led during the season by their talented rookie Kirill Kaprizov. The 24-year-old Russian scored 27 goals and dished out 24 assists. Kevin Fiala was the only other player for Minnesota with 20+ goals on the season.

Cam Talbot will be in net for the Wild. During the regular season, he won 19 games in regulation in 33 starts. Talbot allowed opponents 2.63 goals per game and had a .915 save percentage. Talbot was brilliant in the Game 1 win with 42 saves and then allowed 3 goals on 28 shots in the Game 2 loss.

The Wild have done well against Vegas all season long. This is going to be a back-and-forth series. Look for Minnesota to have a little pep in their step as they are back at home with a chance to regain the lead in the series. Minnesota needed a road win, and they got it. Now they need to grab two at home.

For Vegas, look for them to start a little flat and have a tough time catching up from behind. Taking the Wild as the small underdog here seems to be the play to make. The Golden Knights vs Wild is going to be an interesting series.

Bet the Minnesota Wild at +110 over the Vegas Golden Knights in the pivotal Game 3 of the first-round series.

Rodney Knuppel
Rodney is currently the Content Manager and Director of Business Development at Knup Solutions. Rodney has lived and died by St. Louis Sports since a young ago. Also, Kansas Jayhawks basketball fan. Always down to have an intelligent, and controversially sports conversation. Host of Peoria Fantasy Focus, and has served as PA Announcer for Peoria Chiefs Baseball. Father of 3, youth baseball coach and President of the Youth Basketball Association.
You might also like
NHL Pickssports bettingVegas Golden KnightsNHL
MORE
Read More
13