The Fighting Irish come into this game 3-0, but they still have something to prove. After barely scraping by a win against a terrible Florida State team and winning by 3 over Toledo, Notre Dame needs to prove that their 3-0 record is no fluke. With a convincing victory over No. 18 Wisconsin, the Irish can gain some confidence before a big game against Cincinnati.

Jack Coan has been playing well this year and will need to continue. Already throwing for over 800 yards so far, Coan has his work cut out for him. The Badgers defense has been great against the pass so far this year, only allowing an average of 161 yards per game and only 1 touchdown.

The Badgers need a win. After blowing out Eastern Michigan last week 34-7, look for some of that confidence to roll over into this week. A loss would take the Badgers to 1-2 and stifle their hopes for anything worthwhile postseason. The passing game has gotten off to a slow start so far, with 0 touchdowns coming through the air. Look for that to change.

Chez Mellusi has been the workhorse for the Badgers on the ground this season. Already carrying the ball 51 times, he has amassed 265 yards through 2 games. Against a Notre Dame team that is allowing 151 yards per game on the ground, expect the Badgers to take full advantage of this in order to get their offense rolling. 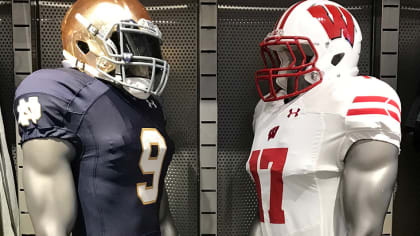 All odds listed are courtesy of DraftKings

Both teams are coming into this game hungry. Wisconsin needs a win to stay relevant for the season and Notre Dame needs a convincing victory to show they aren’t just getting lucky with their wins. Although the passing defense of the Badgers has had a great year so far, they haven’t yet faced a QB as talented as Jack Coen.

Coen is playing against his old team and is looking to continue his stellar season thus far. With Wisconsin being favored in the spread, this should be a great chance to go against the grain on what could be an electric day offensively.

Looking at the stats of both teams it may seem like this one would lean towards the Badgers. And the books agree with you. However, digging deeper the Badgers’ only win so far has come against Eastern Michigan during which they held the QB to 53 yards in the air. A great effort but back up a week and we see that versus Penn State, the Badgers allowed Sean Clifford to throw for 247 yards and a TD.

Without looking at the individual games, it appears the Badgers have an amazing pass defense. And they are good! But they haven’t yet faced a QB the caliber of Coen and there’s a good chance they could struggle mightily against the pass this week. With the Notre Dame Moneyline sitting at +190, this is a great opportunity.

Notre Dame vs Wisconsin will likely be high-scoring. Whether it is the Badgers adding to their 5 rushing touchdowns or the Irish adding to their 8 TDs through the air, this game is likely to be somewhat high-scoring. Even with a Notre Dame win, still expect the Badgers to get their fair share of points against a defense that isn’t even close to being in the top-100 in any category.

Free Prediction: Teams combine for a total of 59 points.