The most high-profile non-conference matchup involving the Pac-12 is probably the meeting between Oregon and Ohio State on Sept. 11. This has all the makings of usurping that showdown, assuming the Bruins follows through on our LSU vs UCLA prediction and everything we’re about to write about them.

This is the first-ever meeting between the two schools and could provide some very compelling theater across the college football landscape.

This will mark the LSU Tigers‘ 2021 debut, while the UCLA Bruins enter at 1-0 after thrashing Hawaii last week. The Bruins are now 66-32-5 in season-opening games, with Chip Kelly picking up his first non-conference victory since taking over the UCLA program.

Kelly seems to finally have his fingerprints on things in Pasadena after taking over a disastrous situation from Jim Mora, Jr. Ed Orgeron, on the other hand, might already be on the hot seat (as crazy as that sounds) entering the year after finishing 2020 5-5. The Tigers won the National Championship two years ago but seemed quite removed from that status already.

This is a case of two programs going in opposite directions. Keep an eye on the Bruins going forward. 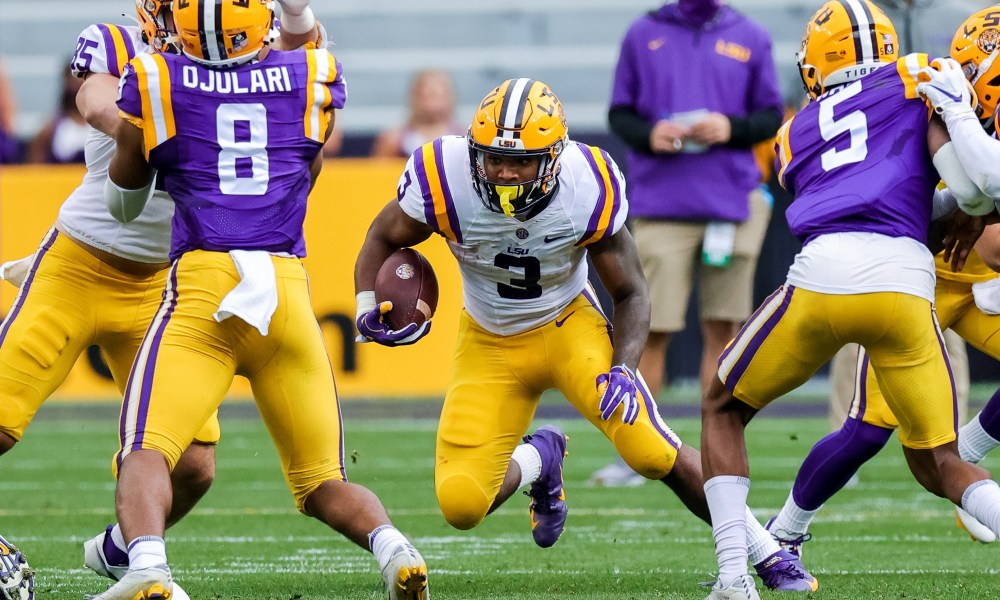 Check out our free LSU vs UCLA prediction and betting writeup for the NCAAF Week 1 game from the Rose Bowl in Pasadena, California.

The other factors going against LSU include their quarterback situation and mother nature. Hurricane Ida displaced the team this week, forcing them to practice in Houston as opposed to Baton Rouge before flying to the West Coast on Thursday.

Myles Brennan suffered an arm injury earlier in camp and won’t be able to play, elevating Max Johnson to the first-team offense. If LSU is able to pull this one out, it could definitely be a season-defining win considering all the odds that are stacked against them. We just don’t see it happening.

UCLA put up 44 points last week against Hawaii, while LSU is coming off a year in which their defense ranked 124th in the country in yards allowed per game.

The Tigers should be better on that side and boast a conference Defensive Player of the Year candidate in cornerback Derek Stingley, Jr, but slowing down the dual rushing attack of Zach Charbonnet and Brittain Brown will be a tall task.

Plus, it isn’t like Johnson is inexperienced. He won’t have Ja’Marr Chase, but he did throw eight touchdowns on an 88% completion rate last year for a team that finished 14th in the country in passing.

This should be a fun game with plenty of points, ultimately elevating the Bruins back into the conversation and making their dates with Oregon, Utah, and USC that much more compelling.

Indiana vs Iowa Prediction & College Football Odds for Week 1
Next