The Phoenix Suns will host the Milwaukee Bucks in Game One of the 2021 NBA Finals in Phoenix, Arizona, at 9:00 p.m. ET.

This will be Phoenix’s first appearance in the Finals since 1993 when the Charles Barkley-led crew fell to Michael Jordan’s Chicago Bulls 4-2. The Suns are still searching for their first title as a franchise.

Who Steps Up for the Bucks?

The Milwaukee Bucks have also endured a long stretch of absences from the NBA Finals, ending a streak that began in 1974 after the Boston Celtics captured the title, 4-3.

Giannis Antetokounmpo is doubtful heading into Tuesday’s headliner, still suffering from the effects of a hyperextended knee in Game Four against the Atlanta Hawks; the Bucks dropped that contest but won the next two to advance, even without their two-time MVP.

With the Greek Freak set to miss at least one game, it will be incumbent on Khris Middleton and Jrue Holiday to step up for their squads.

Middleton is a two-time All-Star and has scored 30+ four times in the past two rounds, including two 38-point outbursts. He has the requisite talent to carry his team but is known to be inconsistent and is prone to disappearing for entire games if his shot stops falling.

For Holiday, situations like these are exactly why the Bucks traded Eric Bledsoe, George Hill, and picks— he has been the second option before in his career, primarily with Anthony Davis as a New Orleans Pelican, and will have to bear that load until Giannis returns. Holiday averaged 26 points, 11 assists, and 7.5 rebounds in two full games without the Bucks’ usual star and must produce similar numbers to steal Game One on the road. 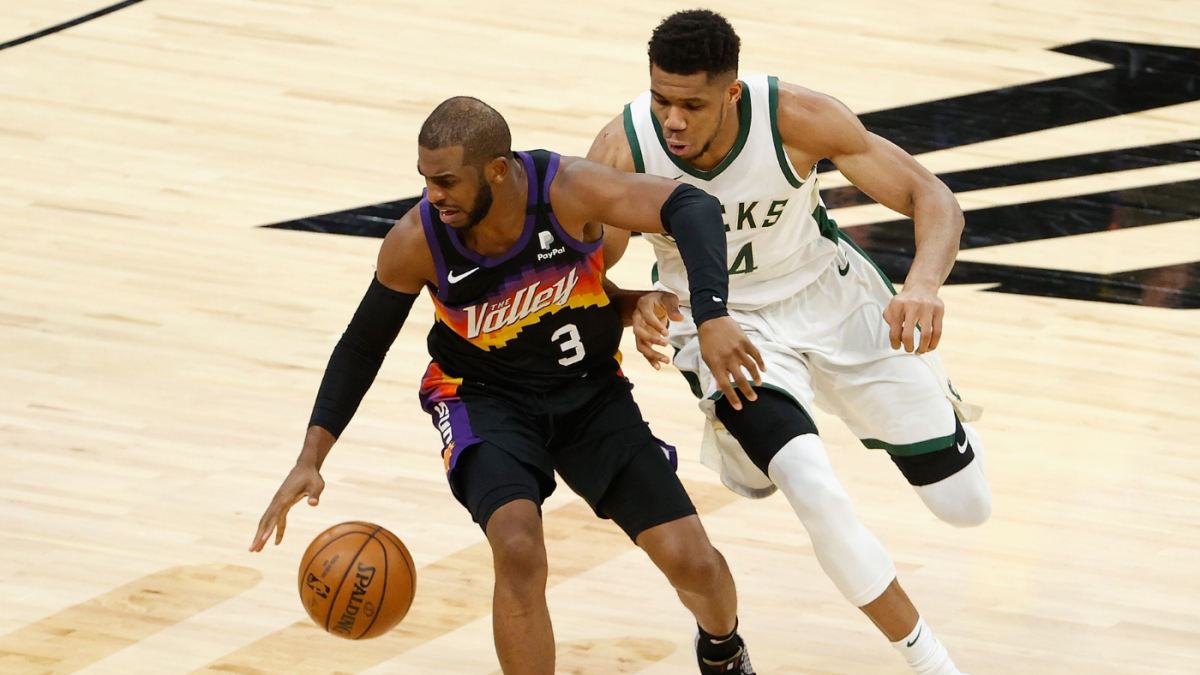 The Phoenix Suns will host the Milwaukee Bucks in Game One of the 2021 NBA Finals in Phoenix, Arizona, at 9:00 p.m. ET.

The Suns’ Stars Have Been Shining

One of the major stories for Phoenix is that Chris Paul will be making his first appearance on basketball’s biggest stage, only reaching the conference finals for the second time in his 16-year career in these playoffs. Paul scored a career playoff-high in points (41) and a career-high for points in a half (33) in Game Six against the Los Angeles Clippers, ultimately punching the ticket through to the final round. He also scored 37 to close out the Denver Nuggets in the second round, which was his highest output in any game since 2018 before the 41-point masterclass.

Devin Booker is also making his first appearance in the Finals in what has been the first postseason run of his career; the Suns’ leading scorer has averaged 27 points, 6.4 rebounds, and 4.8 assists throughout the playoffs and is playing with supreme confidence and determination despite a broken nose he received against the Clippers.

For all of the stars that will feature in the game, a key matchup will occur at the center position between Phoenix’s DeAndre Ayton and Milwaukee’s Brook Lopez.

DeAndre Ayton has been a candidate for the most impressive player in the playoffs, consistently matching or outplaying Anthony Davis, Nikola Jokic, and Ivica Zubac thus far. The third-year center is averaging 16.2 points and 11.8 rebounds on 70.6% shooting and has played like a seasoned veteran as opposed to a first-timer in the postseason.

Brook Lopez, on the other hand, has gathered plenty of experience over the years and is entering, having scored 33 points in Game Five against the Atlanta Hawks and made 61.3% of his attempts against the Hawks, including 36.4% of his threes. If the 7-footer can continue to knock down perimeter shots and score effectively, he will have a matchup advantage with Ayton, who is more comfortable defending in the restricted area.

The Bucks had a rare hot hand from three towards the tail end of the Atlanta series, and I expect them to keep it up but fall just short to a Phoenix team that will win but not cover. The Suns had the fourth-best home record in the NBA this season at 27-9 while the Bucks were just 20-16 on the road, and without Antetokounmpo, this will be even harder to overcome.

Take the Suns to win a shootout in Game One as both teams forgo feeling each other out and light it up from outside at the expense of quality defense.

Grant Mitchell
My name is Grant and I am a DMV native and a sports junkie through and through. My love for sports started when I was four years old, when one day I flipped the channel to Sportscenter on ESPN while I was eating my morning breakfast— not much has changed since then! If I'm not exercising or jamming out to some good music, you can find me listening to, watching or reading about the world of athletics.
You might also like
2021 NBA FinalsBetting PickMilwaukee BucksPhoenix SunsNBA
MORE
Read More
20 The unfortunate end to NC State’s CWS run
Next