Lakers vs Warriors betting preview: the Los Angeles Lakers will play host to the Golden State Warriors on Wednesday night for their first game of the play-in tournament. The winner of this game clinches the seventh seed in the Western Conference and a date with the Phoenix Suns in the first round of the NBA Playoffs. The loser will play the winner of the Memphis Grizzlies/San Antonio Spurs matchup, and whoever wins that matchup will clinch the eighth seed.

The Lakers slipped to the seventh spot in the West after LeBron James went down with a high right ankle sprain in March, which sidelined him for the longest stretch of his career.

The Warriors, on the other hand, closed out their season with an 8-1 record in the month of May, as they were heading into the month in danger of even being in the play-in tournament.

Stephen Curry averaged 36.8 points, 5.6 assists, and 5.1 rebounds per game in the month of May, as he was named Western Conference Player of the Month.

He’s been tasked with keeping the Warriors afloat all season long, like his other “Splash Brother,” Klay Thompson missed his second consecutive season due to an Achilles tear and torn ACL.

While the Warriors largely beat up on lesser competition in May, they were still able to beat the Utah Jazz and Phoenix Suns on back-to-back nights, which is no easy task when you consider that those two teams are the top two seeds in the West. 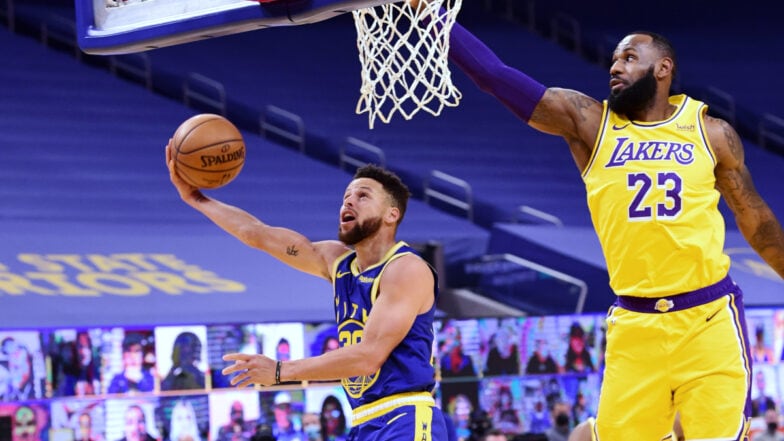 LeBron Looks to Put the Injury Behind Him

James has had a ton of trouble recovering from his high ankle sprain, as he’s only suited up in four games since March 20th. In the two games he played to close out the season, he looked good and put up his usual numbers in less than 30 minutes a night, but the question becomes is if he can take on a larger workload now in the postseason and play with 100 percent of his intensity on both ends of the floor.

James is too smart of a basketball player to not be effective in any capacity throughout the course of the game, so even if he struggles with his jumper or driving to the rim, he can get others involved and then pick his spots once he gets into the flow of the game.

Anthony Davis hasn’t looked like the same player for much of the season, but he’s finding his groove at the right time, averaging 28.0 points, nine rebounds, and four assists over his last five games.

Lakers vs Warriors Betting Prediction: Lakers will win, BUT…

Curry will get his, but LeBron and AD will be too much for the Warriors to handle. The Lakers are still a threat to win it all if LeBron can manage his injury well. However, I think the Warriors will still be able to cover the spread, as they will lose by less than 5 points.

Sameer Kumar
From the greater New York City area. Big fan of sports and love breaking down a wide range of topics in the sports world such as rumors, analysis and also love to share the stories of athletes and how they got to where they are. In my downtime, I love to travel, try new things, read, listen to music, and spend time with those who matter most to me most.
You might also like
Golden State Warriorslos angeles lakersNBA Pickssports bettingNBA
MORE
Read More
24