The Tampa Bay Rays will welcome the Boston Red Sox to Tropicana Field for a three-game set to close out the month of July. This series will be crucial, as Tampa Bay only sits one game behind Boston in the AL East standings.

HISTORY: These two division rivals have met six times this season. The Rays dropped the first three in Boston before winning two of three at home last month.

Boston (63-40) traded four games with the Toronto Blue Jays this week after taking two of three from the New York Yankees over the weekend. They have the most wins in the American League, but there isn’t much breathing room between them and Tampa atop the annually competitive AL East. The Red Sox looked primed for a return to the postseason after a two-year drought.

Alex Cora will send Martin Perez to the mound to open the vital series. The tenth-year left-hander hasn’t recorded a win since June, but he hasn’t given up more than three earned runs in his last seven starts. Perez hasn’t been spectacular, but he’s been steady, posting a 7-6 record with a 4.18 ERA and 80 strikeouts.

Ace Nathan Eovaldi is slated to start this Saturday, and right-hander Nick Pivetta is expected to take the mound Sunday. Eovaldi earned his first win of the season against Tampa Bay after only giving up one run over seven innings of work. The 2021 AL All-Star has thrown six or more strikeouts in each of his past five starts. Pivetta got roughed up by the Blue Jays, but he looked impressive in his start in Tampa last month, throwing eight strikeouts over seven innings and giving up no runs.

Boston has been led by the infield duo of Rafael Devers and Zander Bogaerts offensively. Bogaerts has been one of the more consistent hitters in the league for eight seasons now, and he’s batting over .300 for the third year in a row. He’s recorded hits in four of Boston’s last five games. Devers leads the team in RBI (82), and he’s recorded multiple hits in each of his last three games.

Kike Hernandez is having a nice impact in his first season over from Los Angeles, and he’s recorded a hit in eight of his last ten games. Fellow former Dodger Alex Verdugo is on a five-game hit streak himself. Veteran slugger J.D. Martinez is always a threat to go yard, and he has 20 homers on the season. Newly acquired outfielder Kyle Schwarber is sure to feature at some point this weekend as well. 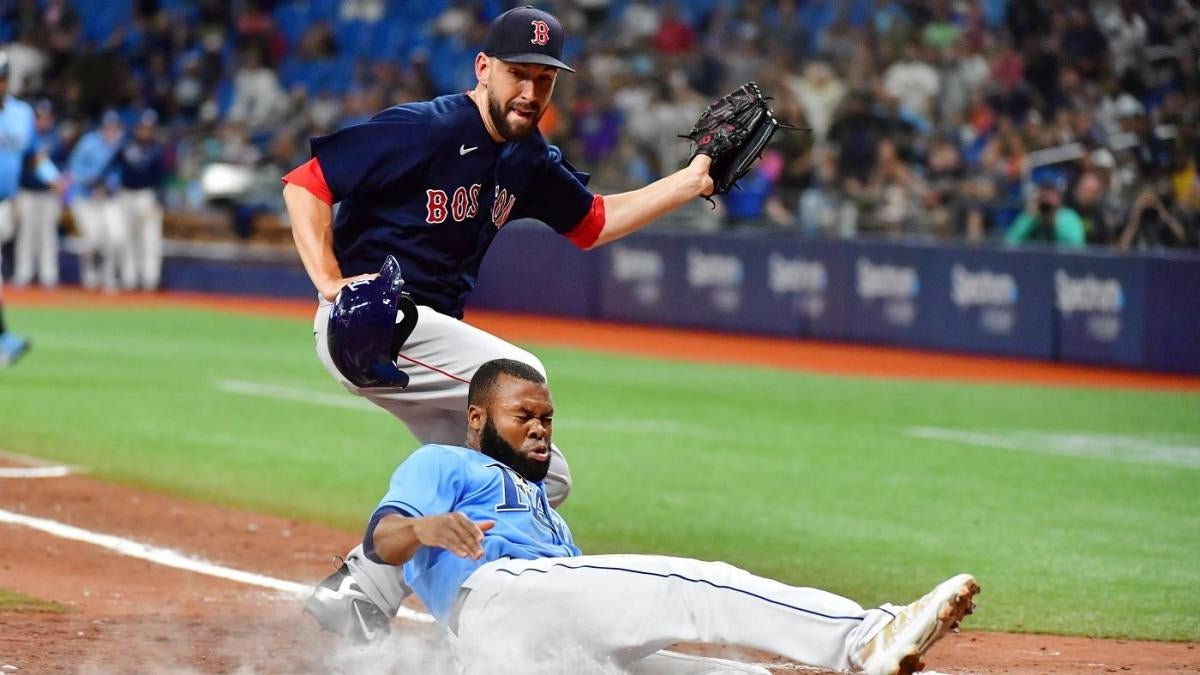 These two division rivals have met six times this season. The Tampa BayRays dropped the first three in Boston before winning two of three at home last month.

Tampa Bay (61-42) abruptly ended a three-game losing streak with a 14-0 thumping of the New York Yankees. Prior to the skid, the Rays had won thirteen of their last sixteen games and have appeared to gain their postseason steam.
Kevin Cash will turn to second-year pitcher Josh Fleming this evening. The 6’2 left-hander was impressive during the Rays World Series run last season, posting a 5-0 record. He’s altered between the rotation and bullpen this season and generated mixed results. Fleming is 7-5 with a 4.07 ERA, and he’s won three of his past four home starts.

Ryan Yarbough will get the call Saturday evening, and Shane McClanahan will close things out on Sunday. Yarbough is coming off a strong road start against the Cleveland Indians, where he tossed six strikeouts over seven innings of work. He’s given up more than two earned runs in three of his last ten starts. McClanahan is in the midst of a solid rookie season. The in-state USF product posted a 4-4 record, with a 3.93 ERA and 84 strikeouts, which both rank within the top five for all rookies.

Austin Meadows and Randy Arozarena lead a balanced Rays lineup. Meadows leads the team in RBI (76), and he’s coming off of his second multi-home run game in a week. Arozarena is enjoying a breakout season, and he’s recorded two or more hits in six of his last nine games. Infielder Joey Wendle leads the Rays in batting average (.281).

The deadline deal for Nelson Cruz has paid off already, as the veteran slugger has already hit two timely home runs since his arrival. Brandon Lowe leads the team with a career-high 22 homers.

These late-season three-game sets mean so much. We watched the San Francisco Giants jump in the NL West standings earlier this week, and the Rays now sit in a similar position. Coming off of such a huge home win at home, Tampa Bay has a really good chance of taking this first one off of momentum alone. Martin Perez has been steady, but the Tampa lineup is clicking right one, so look for them to win the first game at home. Also, take the over. After their 13-1 loss to the Toronto Blue Jays last night, the traveling Red Sox should enter Tropicana motivated.

Nathan Eovaldi has been really good since the end of June, so he may be able to lead them to a road victory on Saturday night. The Rays have been really good in the final game of sets this season, closing strong seven of their last ten three-game sets with victories. Nick Pivetta pitched very well in his last start in Tampa, but we like the Rays to continue their span of strong finishes and close out the series Sunday with a win, leaving them less than a game back of Boston in the AL East standings.

Corey Ghee
Avid sports writer and bettor. VCU Alum. Dodgers Fan. Cameron Crazy. Longhorn Football. James Harden Advocate. 4x Fantasy Football Champion. I love the game of basketball but I serve a diverse perspective of sports, from court to field to pitch to diamond to ice to clay. There’s always a decision, and a profit to be made. I’m here to help and learn along the way. Spreads, lines, totals, let’s win together.
You might also like
Betting PickBoston Red SoxMLB PicksTampa Bay RaysMLB
MORE
Read More
44