Heading into week eight, it was the opposite end of the spectrum for both programs but ultimately ended with the same result. The Michigan Wolverines (7-0) had no problem burning Northwestern’s defense with their potent running game as they ran for 294 rushing yards and only 163 passing yards. Both Corum and Haskins had two touchdowns in the game.

The Michigan State Spartans (7-0) are also undefeated heading into this matchup. However, things weren’t easy as the team was trailing at halftime. Just like their in-state rivals, the program has a superb game as the team had 100 rushing yards and 141 passing yards. Michigan State’s nail-biting victory had to come largely thanks to Cal Haladay’s 30-yard pick-six in the very first quarter. 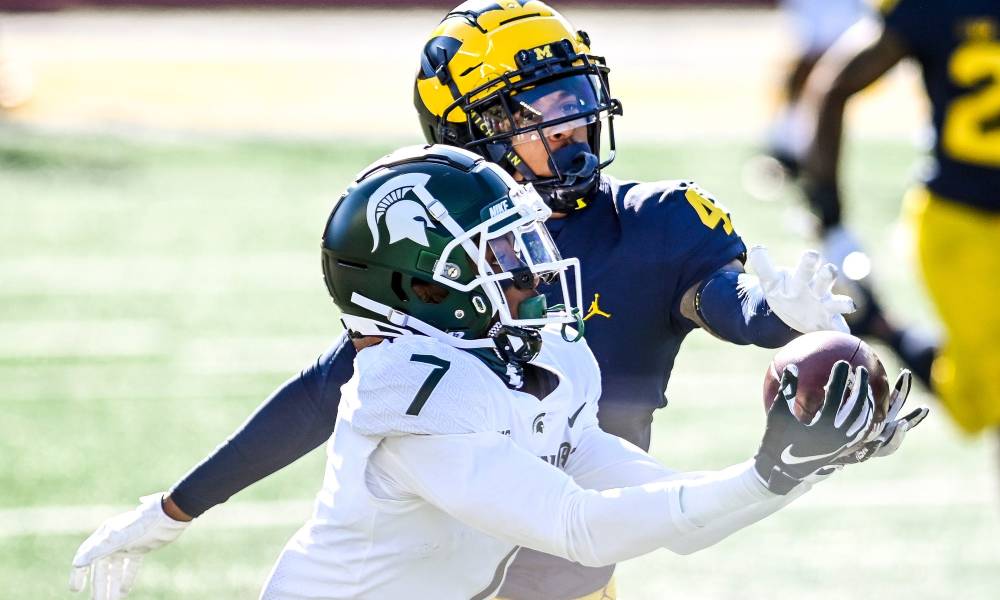 The Michigan Wolverines will head to East Lansing on Halloween weekend as the two teams were on a collision course all season long. This game sets the stage asThe Battle for Paul Bunyan Trophy is on the line, and one of these undefeated schools will have a loss on their season record. These two programs have definitely turned it around from last year’s disastrous start for both schools.

Michigan State is also coming fresh off a bye-week as they enter into this week in preparation for their biggest showdown this season. Michigan hasn’t much to stress about as they only gave up seven points to Northwestern.

Michigan’s closest win came against Nebraska as they edged a narrow 32-29 win in an overtime thriller two weeks ago. Michigan State’s only glaring issue is their defensive secondary as the unit has allowed 286.1 passing yards per game.

Cade McNamara may use the only flaw in Michigan State’s defense to his advantage. In the first four games of the season, he rarely threw the ball as he hit a high mark of 16 attempts against Rutgers. However, in the last three contests, he has thrown at least 27 attempts and thrown as many as 38 attempts in the game against Nebraska.

This is an important game as there is a lot on the line in the Battle of Michigan. Michigan State’s passing defense struggles could easily lead to some easy points, and Michigan State can break through Michigan’s defense with a few good dashes then this could be a high-scoring matchup.

The over is also 5-0 in the Wolverines’ last five road games.

Timothy Kim
I am a student at the University of Miami. I am currently majoring in sports management and minoring in entrepreneurship. My hobbies are watching sports especially NCAAB, NBA, MLB, and the UFC. I also enjoy investing in the stock and crypto currency market. I hope to pursue a masters in the future in Finance or a degree in law to have the chance to work with athletes in the future.
You might also like
college footballFree PredictionMichiganmichigan stateFree PicksNCAAF
MORE
Read More
10