The $500,000 United Nations Stakes (G1) on Saturday’s Haskell undercard drew a full field of ten older turf routers who will navigate 1 3/8-miles. Although the United Nations isn’t a Breeders’ Cup Challenge contest, we may see some of these horses compete in the Breeders’ Cup Turf in November at Del Mar. 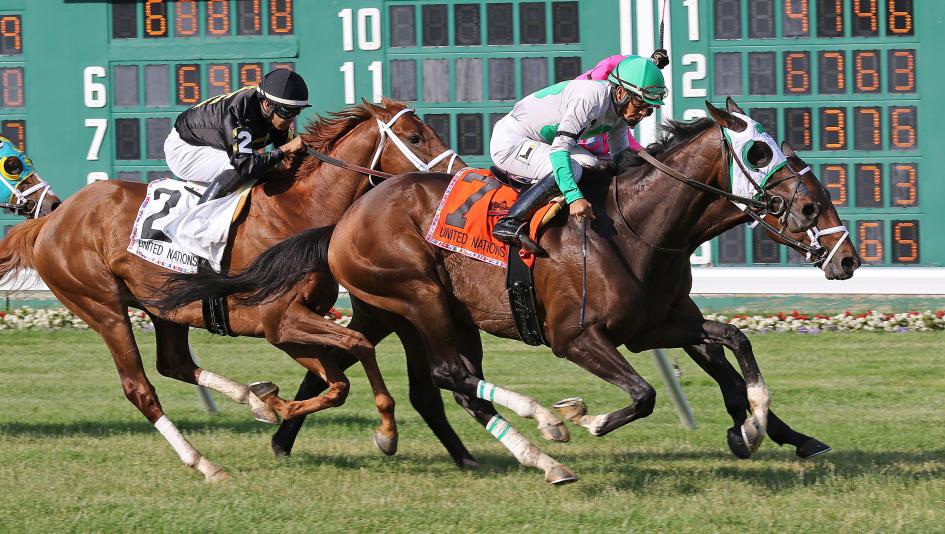 ARKLOW (8-5), at seven years old, is the old man of the group, but he hasn’t lost a step and is hoping to avenge his fourth-place finish in last year’s United Nations. The Brad Cox trainee started 2021 with a one-length victory in the 1 1/2-mile Louisville Stakes (G3) as the favorite. He rarely puts together back-to-back victories, but the classy old guy is the only Grade 1 winner in the field. Win contender.

TRIBHUVAN (3-1) was dismissed at 15-1 in the 1 1/4-mile Manhattan Stakes (G1), despite winning the 1 1/8-mile Fort Marcy (G2) in his first start of the year. Tribhuvan looked like he was going to take Manhattan in the stretch, but his stablemate Domestic Spending spoiled the bid and won by 2 3/4-lengths. However, the United Nations is a little shorter, and the Chad Brown trainee could rebound. Although Tribhuvan has been on the lead in his past two starts, he has tactical speed and is capable of sitting behind the pace. Win contender.

WINTERS BACK (8-1) is the likely pacesetter if Tribhuvan doesn’t grab the lead. The Todd Pletcher trainee was second by 1 1/2-lengths in the Monmouth Cup (G3) in June. Winters Back is going a little further this time, but if jockey David Cohen can slow the pace, Winters Back could surprise, or at least finish in the money. Use underneath.

MASTER PIECE (4-1) ran evenly in the Manhattan Stakes and placed sixth after a wide trip. He was farther back than usual, which might have been a factor. Chad Brown is hoping to regroup and gives the mount back to Joel Rosario, who was aboard for the colt’s allowance victory at Keeneland. I’m not 100% sure Master Piece fits class-wise; however, he is a Group 2 winner in Chile. Use underneath.

SERVE THE KING (8-1) shook off the rust in his 2021 debut in the Monmouth Stakes (G3) over good ground. He made a mild bid to gain fourth place, but this guy prefers a firmer course. Although he’s a 5-year-old, Serve the King has raced only seven times and has never been worse than fourth. He’s taking a step up in class and adding distance, but the Brad Cox trainee won over this course before with jockey Paco Lopez. Use underneath.

GLYNN COUNTY (20-1) jumps up in class, but he’s won two of three starts this year, once at 1 1/8-miles and last time out at 1 1/2-miles. Trainer Mike Maker is always dangerous, and Tyler Gaffalione, who has won with Glynn County before, jumps back into the saddle. Live longshot.

Laurie Ross
Laurie is a handicapper, pedigree consultant, and published author. Her work has been featured on numerous prominent racing websites and she is a reoccurring guest on sports radio programs. She is also a member of the National Turf Writers and Broadcasters Association. Her yearly publications contain tremendous insight and value for bettors and horsemen. The Freshmen Sire Guide has received accolades from leading trainers and handicappers and her Triple Crown guides are a best-selling feature.
You might also like
Betting PickHorse Racing picksHorses
MORE
Read More
45