The Princess Rooney is a seven-furlong event for 4-year-old and older fillies and mares and is a Win-and-you’re-in Challenge event for the Breeders’ Cup Filly and Mare Sprint.

Carded as race 11, The Princess Rooney attracted eight fillies and mares lead by the morning-line favorite Estilo Talentoso. Although she’s been in the money in all 14 starts, the Juan Arriagada trainee has won only three times, twice at Gulfstream and once at Belmont.

Laura’s Light has been out of the money only four times in 12 starts. The Southern California invader hopes to make The Princess Rooney her third victory in a row. The Peter Miller trainee was last seen winning the Ouija Board Distaff by a widening 4 3/4-lengths over a sloppy track at Lone Star. Laura’s Light carved out a graded stakes career as a turf miler, and it remains to be seen if she’ll transfer that form to fast dirt. She may get another sloppy track on Saturday since the usual afternoon showers are expected in Florida.

Pacific Gale returns to Gulfstream Park, where she has hit the board in four of seven starts. Earlier in the year, she bested Sound Machine by 3 1/2-lengths in the Hurricane Bertie Stakes (G3) and Thissmytime by 2 3/4-lengths in the Inside Information Stakes (G2). The John Kimmel trainee could be highly competitive against the top pair if she duplicates either effort.

Ce Ce is also a California invader and is looking for improvement in her third start of the season. She’s cutting back in distance after being soundly beaten by ten lengths in the 1 /16-mile Santa Maria (G2). However, Michael McCarthy had an excuse, as she bobbled at the start of the race and was wide around the turn. Last year, Ce Ce won three straight, including the Beholder Mile (G1) and Apple Blossom (G1), so the class is there. 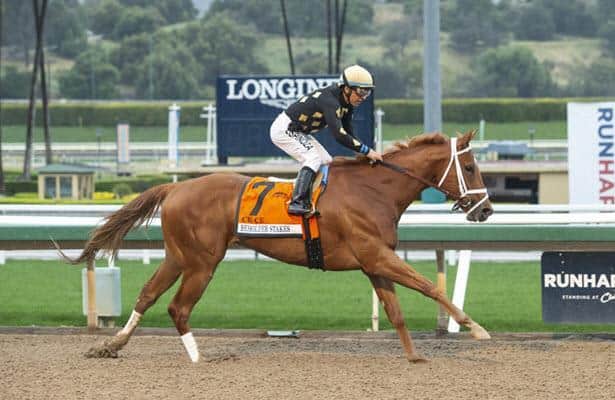 Thissmytime wasn’t embarrassed by her second-place finish to Pacific Gale in the Information Stakes since it was her first start in a graded stakes. Previously, she won the Millions Filly And Mare Turf Preview when it was taken off the turf, then followed up with a victory over Allowance Optional Claiming class runners. The Kathleen O’Connell trainee finished out of the money only twice in her ten-race career. She’s a cut below the top but is worth a longshot look.

There are three or four in here that could grab the early lead, which is typical of sprint races. Thissmytime, Laura’s Light, Pacific Gale, and longshot Hallawallah could play a role in the outset. Estilo Talentoso is happy to track the pace and may draft in behind the leaders. Horses usually go wide around the turn, which would open a space for her on the rail in the stretch.

Laurie Ross
Laurie is a handicapper, pedigree consultant, and published author. Her work has been featured on numerous prominent racing websites and she is a reoccurring guest on sports radio programs. She is also a member of the National Turf Writers and Broadcasters Association. Her yearly publications contain tremendous insight and value for bettors and horsemen. The Freshmen Sire Guide has received accolades from leading trainers and handicappers and her Triple Crown guides are a best-selling feature.
You might also like
Betting PickHorses
MORE
Read More
42

How Is This Italian Euro 2020 Side So Strong?
Top US Sportsbooks