The Turf Classic is carded as race 7 out of 11, with post time scheduled for 3:47 p.m. EDT. No rain is forecast, so the course should be firm.
Let’s take a quick look at the horses most likely to hit the board.

Gufo has never finished off the board in twelve-lifetime starts. He enters the Joe Turf Classic with a two-race win streak, and most recently in the Sword Dancer (G1) at Saratoga, the Christophe Clement trainee made a breathtaking last-to-first move to beat Japan by a neck and Cross Border by 3 1/2 lengths. Win contender.

Arklow had to steady in the stretch the Turf Cup (G2) at Kentucky Downs, but the gallant 7-year-old still closed to miss by a neck. The Brad Cox trainee’s last victory was in the Grade 3 Louisville Stakes back in May. The old-timer may have won one of four starts at Belmont, and that was the 2019 edition of the Turf Classic. Win contender.

English invader Japan had to alter his path in the stretch of the Sword Dancer Stakes, which caused him to miss the victory by a neck. However, the Aidan O’Brien trainee is back and ready to give it another go at the Turf Classic. The one knock against Japan is that he has only one victory in six tries at 1 1/2 miles. Exotics. 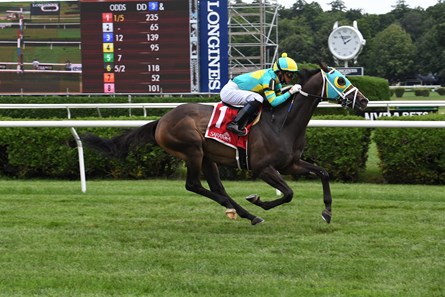 The 7-year-old Cross Border is one of the most consistent runners in the Turf Classic. After winning the Bowling Green Handicap (G2) at Saratoga, he had a wide trip in the Sword Dancer and put in a mild bid to finish third.

The Mike Maker trainee hasn’t won at Belmont, but he does have three second-place finishes and a third in seven starts. Cross Border isn’t the best in this field, but he is capable of finishing in the lower exotics.

The free-running Channel Maker owns four Grade 1 victories, including three at Belmont. In the last three years, the Bill Mott trainee has won the Turf Classic twice, Last year and in 2018, plus Channel Maker finished second in 2020.

Since returning from Dubai in March, the 7-year-old has failed to hit the board, but Channel Maker could steal the Turf Classic again as the lone speed. Live longshot.

Manny Franco is an excellent judge of pace, and as the lone speed, Channel Maker can slow down the fractions and steal the race.

Cross Border and longshot Rockemperor could press Channel Maker on the front end. If this happens, the race sets up nicely for Gufo and perhaps Arklow.

49ers vs Cardinals Prediction & NFL Odds for Week 5
Next