The $1 million Haskell Invitational at Monmouth Park on Saturday offers a win-and-you’re-in invite to the 2021 Breeders’ Cup Classic.

The 1 1/8-mile Grade 1 contest attracted a field of seven 3-year-olds, including the second-place finishers from all three Triple Crown races – Mandaloun from the Kentucky Derby, Midnight Bourbon in the Preakness, and Hot Rod Charlie from the Belmont Stakes.

This year Haskell features the “BetMakers Bonzana,” a $1 million bonus to the winner should he also capture the Travers and the Breeders’ Cup Classic. The no-crop-use rule at Monmouth will be in play, but the horses in the Haskell will be allowed to race with Lasix.

Let’s take a look at the major contenders. 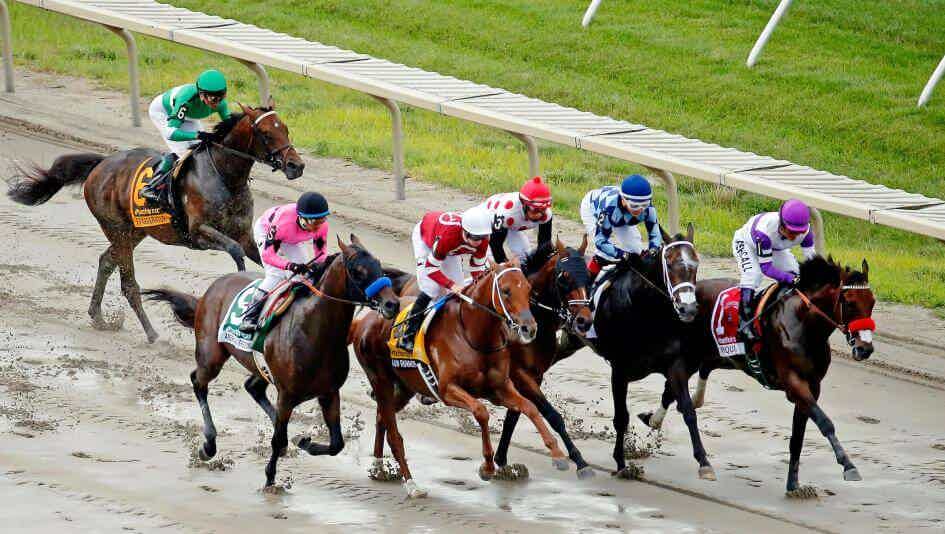 The $1 million Haskell Invitational at Monmouth Park on Saturday offers a win-and-you’re-in invite to the 2021 Breeders’ Cup Classic.

Mandaloun rebounded from his mysterious sixth-place finish in the Louisiana Derby to finish second to Medina Spirit in the Kentucky Derby. Depending on Medina’s Spirit’s drug test outcome, Mandaloun may well be crowned the Kentucky Derby hero should Medina’s Spirit be DQ’ed. After skipping the Preakness and Belmont to train for the Haskell, the Brad Cox trainee prepped in the Pegasus Stakes at Monmouth, giving him experience over the track. Additionally, jockey Florent Geroux gained valuable knowledge on riding without the whip. Mandaloun has tactical speed and can sit anywhere in the field.

Hot Rod Charlie only wins when he is on the lead, but there’s no doubting his tenacity. His battle to the wire with Essential Quality was the highlight of this year’s Triple Crown races. The Doug O’Neill trainee has been working lights-out.

Midnight Bourbon is game and always hits the board. After his runner-up finish in the Preakness, trainer Steve Asmussen gave the colt a breather so he’d be fresh for the Haskell Stakes. Unfortunately, Midnight Bourbon has one drawback. Despite a pedigree to handle classic distances, his only victories are at 1 1/6-miles and shorter.

Following Sea is a talented, undefeated sprinter. His pedigree (by Runhappy out of a stakes-winning sprinter by Speightstown) suggests 1 1/8-furlongs is too far. Not only is the Todd Pletcher trainee trying two turns for the first time and making his graded stakes debut. Flowing Sea may battle on the lead with Hot Rod Charlie. I predict that take Following Sea will take them as far as he can, then fade. Maybe he can hang on for a lower exotics spot.

Antigravity spent his first eight starts in the Midwest, usually finishing second or third. Then, Jerry Hollendorfer shipped Antigravity to Monmouth and was rewarded with back-to-back victories. Hollendorfer doesn’t win the big stakes as much as he used to, but he entered the Haskell hoping to grab third or fourth place. It’s a longshot chance and worth a look for a superfecta spoiler.

Pickin’ Time hopes to return to his 2-year-old form when he won the Smoke Glacken at Monmouth and the Nashua (G3) at Aqueduct. This year he’s finished off the board in both starts, including a 22-length drubbing in the Jersey Derby.

Basso looked like a good thing graduating by eight lengths at Monmouth as a 2-year-old, but that’s the last time he’s come close to the winner’s circle. His return to the races this year in an optional claimer was a dud; he finished a well-beaten last.

Laurie Ross
Laurie is a handicapper, pedigree consultant, and published author. Her work has been featured on numerous prominent racing websites and she is a reoccurring guest on sports radio programs. She is also a member of the National Turf Writers and Broadcasters Association. Her yearly publications contain tremendous insight and value for bettors and horsemen. The Freshmen Sire Guide has received accolades from leading trainers and handicappers and her Triple Crown guides are a best-selling feature.
You might also like
Betting PickHorse Racing picksHorses
MORE
Read More
10