HISTORY: These two teams split their pair of matchups in 2019, with the host team picking up the victory.

The Toronto Argonauts (1-0) started the 2021 campaign off with a win after a rough 2019 season. The Argonauts went 4-14 and nearly finished with the CFL’s worst record. Their late come from behind victory on the road over the Calgary Stampeders was hard-fought, and they don’t appear to be a league doormat anymore.

After bouncing around NFL quarterback rooms, McLeod Bethel-Thompson has found a home in the CFL. He led the Canadian League in passing touchdowns in 2019, and he gives the Argonauts an experienced signal-caller. Bethel-Thompson went 26/37 with 354 yards through the air and added 3 touchdowns (two passing, one rushing) in the win over Calgary.

Bethel-Thompson did a nice job of spreading the ball around in Week 1. Ricky Collins Jr. led the team with 126 yards on six catches, including an 81-yard touchdown score. Eric Rogers and Daniel Braverman each had five catches apiece. John White added 61 yards out of the backfield (28 rushing, 33 receiving). 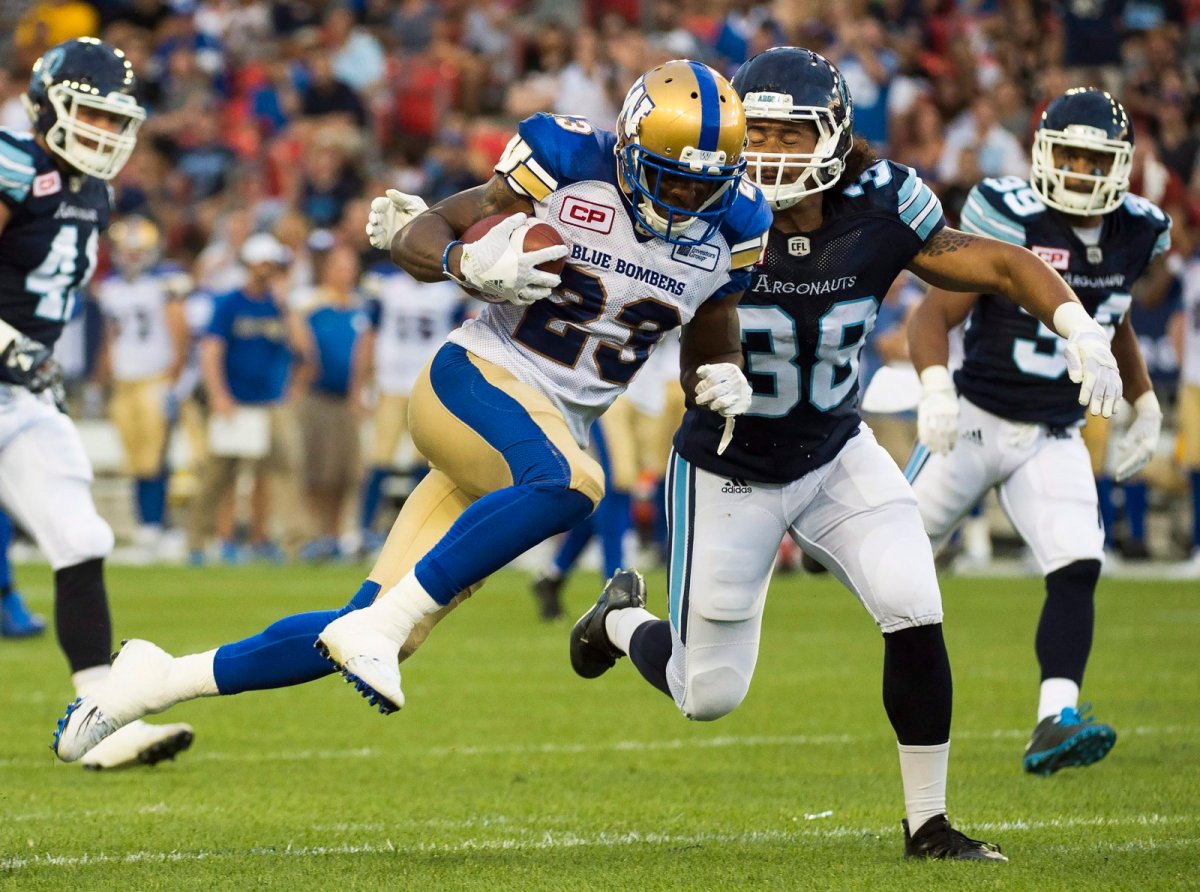 The Winnipeg Blue Bombers will host the Toronto Argonauts this Friday night for the latest Canadian Football League (CFL) action.

The Winnipeg Blue Bombers (1-0) kicked their season off with a physical home win over the Hamilton Tiger-Cats, 19-6. The Blue Bombers stifled former Oregon quarterback Jeremiah Masoli and held the Tiger-Cats scoreless for the final three quarters.

After being acquired from the Argonauts at the trade deadline in 2019, Zach Collaros led Winnipeg to a Grey Cup victory. A revenge win would feel just as sweet, so look for the former Big East Player of the Year to come out with a chip on his shoulder. He went 18/28, with 217 yards and two scores in the win over Hamilton.

Brady Oliviera leads the charge in the backfield. The 5’10 handled the full workload, taking 22 carries for 126 rushing yards and adding a 21-yard reception. Nic Demski and Kenny Lawler are Collaros’ favorite targets. Demski led the team with five catches for 70 yards, while Lawler gained 69 yards on four catches and scored a pair of touchdowns.

After both teams opened up the season on a strong note, this should be a good one. As defending champions, the Blue Bombers don’t feel like a bad play at home here. We’ll know more as the season develops, but after Winnipeg’s smashmouth opening season win, we like them to continue their momentum with a win over Toronto here. Bet on Winnipeg to win, and look into them covering the manageable 10-point spread.

Corey Ghee
Avid sports writer and bettor. VCU Alum. Dodgers Fan. Cameron Crazy. Longhorn Football. James Harden Advocate. 4x Fantasy Football Champion. I love the game of basketball but I serve a diverse perspective of sports, from court to field to pitch to diamond to ice to clay. There’s always a decision, and a profit to be made. I’m here to help and learn along the way. Spreads, lines, totals, let’s win together.
You might also like
Betting PickCanadian Football LeagueCFL PicksCFL
MORE
Read More
44