The Saskatchewan Roughriders will look to follow up their opening season win when they host the Hamilton Tiger-Cats this weekend for another night of Canadian Football League (CFL) action.

HISTORY: Hamilton opened the 2019 season with a home win over Saskatchewan, 23-17.

The Hamilton Tiger-Cats (0-1) struggled in their season-opening loss to the Winnipeg Blue Bombers. The Tiger-Cats scored on their first possession of the year but failed to score for the rest of the game. Hamilton played well defensively, holding the Blue Bombers to 19 points, but they’ll need to shore things up on the offensive side during this road trip.

Jeremiah Masoli began his fifth season as the Tiger-Cats starter on a slow note. He went 24/41 with 242 yards and a score, but he threw two timely interceptions. Hamilton didn’t fail to move the ball offensively, and they just weren’t finishing possessions. After totaling nearly 6,000 yards in 2018, the former Oregon stud remains one of the best dual-threat quarterbacks in the league.

Masoli’s favorite targets are wideouts Jaelon Macklin and Brandon Banks. Maclin led the team with seven receptions for 98 yards and a touchdown on the first possession. Banks, a former WFT speedster, caught eight passes for 77 yards. Look for Masoli to get a few more of his weapons involved this week in what should be an uptempo matchup. 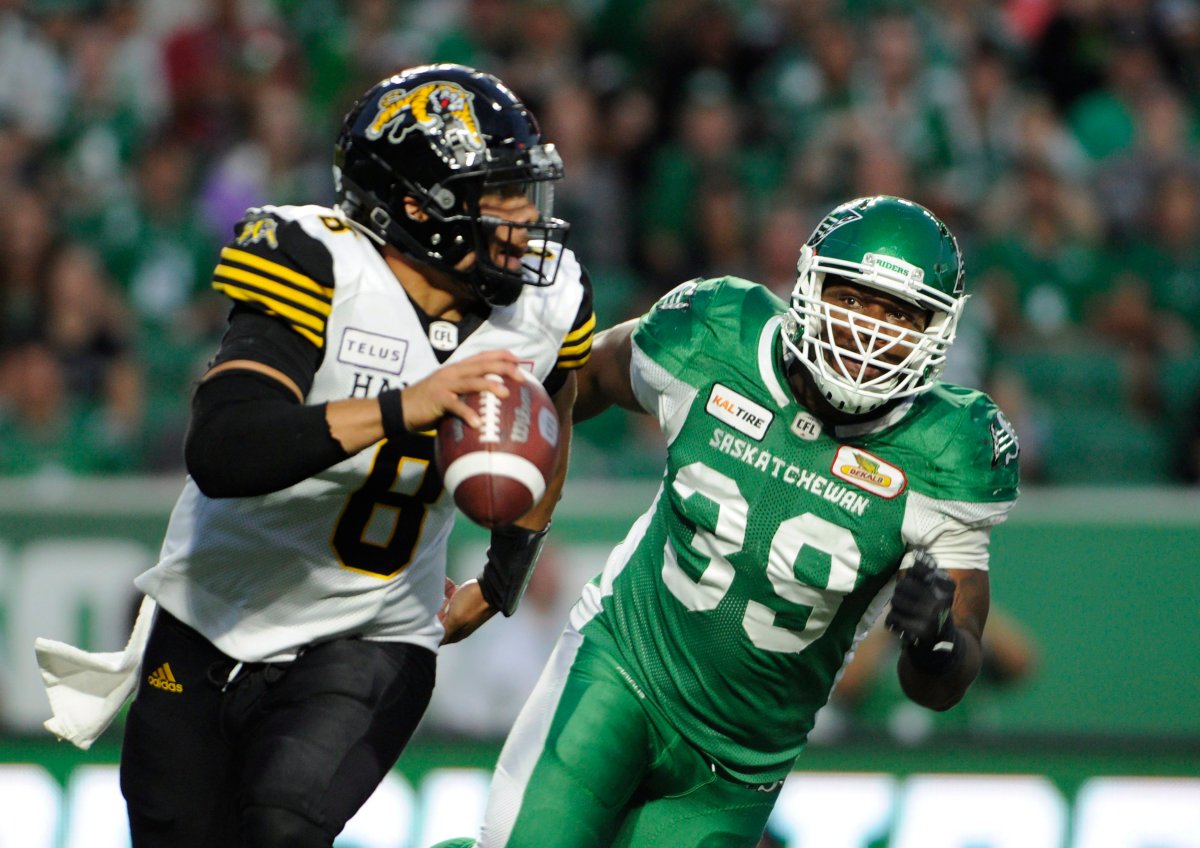 The Saskatchewan Roughriders will look to follow up their opening season win when they host the Hamilton Tiger-Cats this weekend for another night of Canadian Football League (CFL) action.

The Saskatchewan Roughriders (1-0) kicked off their season with a 33-29 victory over the BC Lions. The Roughriders jumped out to a big 23-point lead at halftime and never looked back. The defense stifled the Lions in the first half, capping it off with a pick-six from former Auburn signal-caller Nick Marshall.

Cody Fajardo picked up right where he left off in 2019. After leading the CFL in passing, Fajardo threw for 230 yards, two touchdowns, and nearly added a score on the ground. With the second-year starter leading the charge, Saskatchewan will likely remain in the championship picture this season.

Fajardo distributed the ball well in the opener. Former UCLA wideout Shaq Evans followed up his first CFL All-Star appearance by leading the Roughriders with seven receptions for 69 yards. Jordan Williams-Lambert and Kyran Moore each caught six passes for 49 yards apiece. Veteran William Powell has recorded three-straight 1,000 yards seasons, and he gained 43 yards on 12 carries in the win over BC.

These two teams opened the season on different notes. After posting the best record in the CFL during the 2019 season, Hamilton is almost certainly going to get back on track soon. Their early red zone struggles heading into what could be a high octane game is alarming. The Roughriders picked up right where they left off after a successful 2019 season.

Their offensive was potent, and they played a good game defensively. Saskatchewan enters this home bout with momentum, and we’re going to back them this Saturday. Bet on Saskatchewan to pick up the win over Hamilton.

Corey Ghee
Avid sports writer and bettor. VCU Alum. Dodgers Fan. Cameron Crazy. Longhorn Football. James Harden Advocate. 4x Fantasy Football Champion. I love the game of basketball but I serve a diverse perspective of sports, from court to field to pitch to diamond to ice to clay. There’s always a decision, and a profit to be made. I’m here to help and learn along the way. Spreads, lines, totals, let’s win together.
You might also like
Betting PickCFL PicksCFL
MORE
Read More
9