This Saturday night, June 12th, the UFC travels to Arizona for UFC 263, headlined by the rematch between Israel Adesanya and Marvin Vettori, this time for the UFC middleweight championship.

This is a stacked card with two title fights and the UFC’s first 5-round non-main event or title fight bout. Israel Adesanya will take on Marvin Vettori in a rematch for the middleweight title, Deiveson Figueiredo will defend his flyweight belt against Brandon Moreno in another rematch of their close bout, and fan-favorite Nate Diaz takes on rising star Leon Edwards. 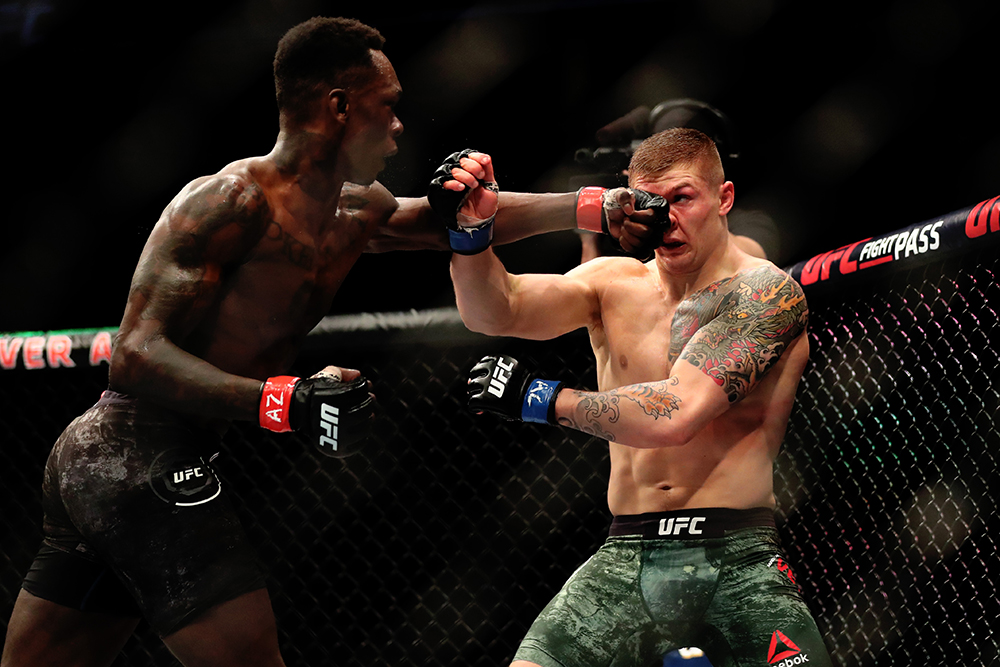 These two battled three years ago, and the fight was amazing. It ended in a split decision victory for Israel Adesanya, which allowed him to retain his undefeated MMA record and catapulted him to a title run.

Adesanya’s last time out, he tried to jump up to light heavyweight to fight the current champ, Jan Blahowicz. Adesanya (20-1) lost by unanimous decision and was dominated on the ground. Adesanya was undefeated to this point. It is going to be interesting to see if the rest of the middleweight division smells blood in the water after seeing how Adesanya was beaten in a pretty dominant fashion.

People do not give Adesanya credit for how amazing of a striker he is. In his 20 wins, Adesanya has 15 KOs and has never been knocked out or submitted before.

Adesanya landed 50% of his total strikes in the first fight and looked like the classier fighter on the feet in the first bout. Adesanya’s style is unique, and his long build gives fighters trouble closing the distance and working past his unique feints.

Marvin Vettori (17-4-1) did not think he lost the first bout vs Adesanya, which ended in a split decision. He has rattled off 5 wins in a row to get back to a rematch with the champ and wants this win more than anything.

Vettori struggled to land anything against Adesanya, landing just 16% of his head strikes. Part of this could be due to the 4-inch height and 6-inch reach advantage in Adesanya’s favor.

Vettori is a great wrestler averaging 2.2 takedowns per fight. Vettori also has 9 of his 17 wins by submission and has never been stopped before. He took Adesanya down twice but was not able to keep him there or do much damage. I think Vettori has to land a couple of takedowns away from the cage so Adesanya can’t just pop up using his height on the fence.

I think Vettori is going to take a completely different approach to this fight the second time around. Adesanya definitely has the advantage on the feet, but I don’t think this is where the fight will play out. Vettori is a powerful fighter and has shades of Blahowicz in his game. I think he will take the same approach as Jan and take Adesanya down. The question is going to be, is Vettori going to be heavy enough and strong enough to keep Adesanya down because obviously, Jan had a huge weight advantage. I think Marvin is able to get the job done in a similar fashion to Blahowicz. 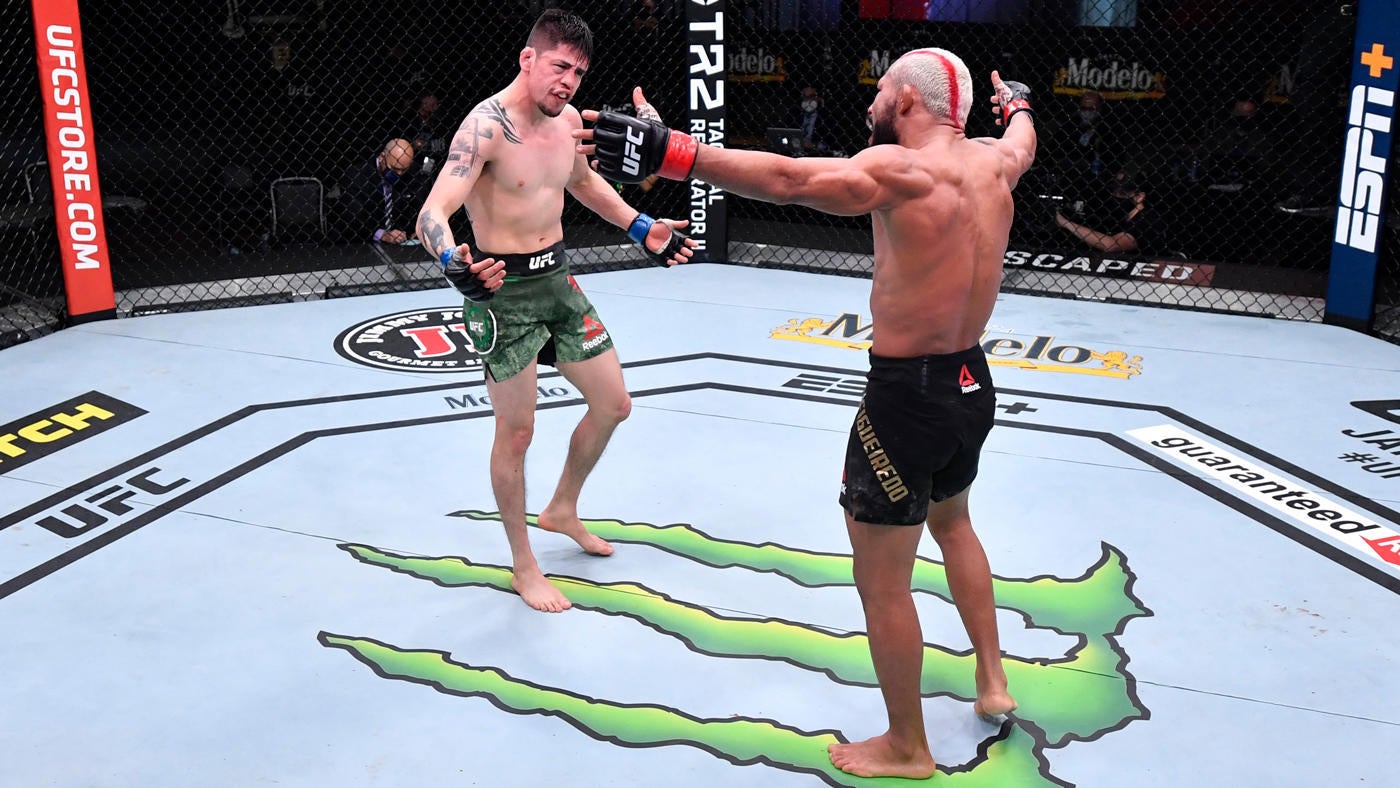 The first bout between these two was just seven months ago. The fight was nothing short of amazing. It was one of the best flyweight bouts we have ever witnessed. Both men landed over 130 significant strikes, and each landed 50% of their takedowns.

Deiveson Figueiredo (20-1-1) is one of the most well-rounded fighters the flyweight division has ever seen. He has 9 wins by (T)KO and 8 wins by submission. He is constantly getting the job done and rarely leaves it up to the judges. If it were not for the low blow point deduction, he would have won the first fight.

Deiveson landed 59.27% of his total strikes in the first bout and looked extremely sharp on the feet and ground. His takedown defense was solid against one of the best grapplers in the division in Moreno.

Neither fighter recorded a knockdown despite the extreme amount of head strikes, so it will be interesting to see if Deiveson, who is better known for his striking, can put Moreno away.

Brandon Moreno (18-5-2) stepped up his striking exponentially to match the champ on the feet, which made the first bout, so fun to watch. Moreno landed 54.6% of his total strikes and only 8 less than Figueiredo, which is noteworthy because it is rare to see people stand with and strike with Deiveson.

Moreno is not known for his striking. He holds just 3 knockout victories but is better known as a submission artist holding 10 submissions.

It is interesting to see the champ as such a heavy favorite after the last fight being so close, but I do think the oddsmakers have the right idea here. Figueiredo is going to look to get hit less than he did in the first fight, and I think he will have success with his counter punching. He has what it takes to defend the grappling of Moreno as well. 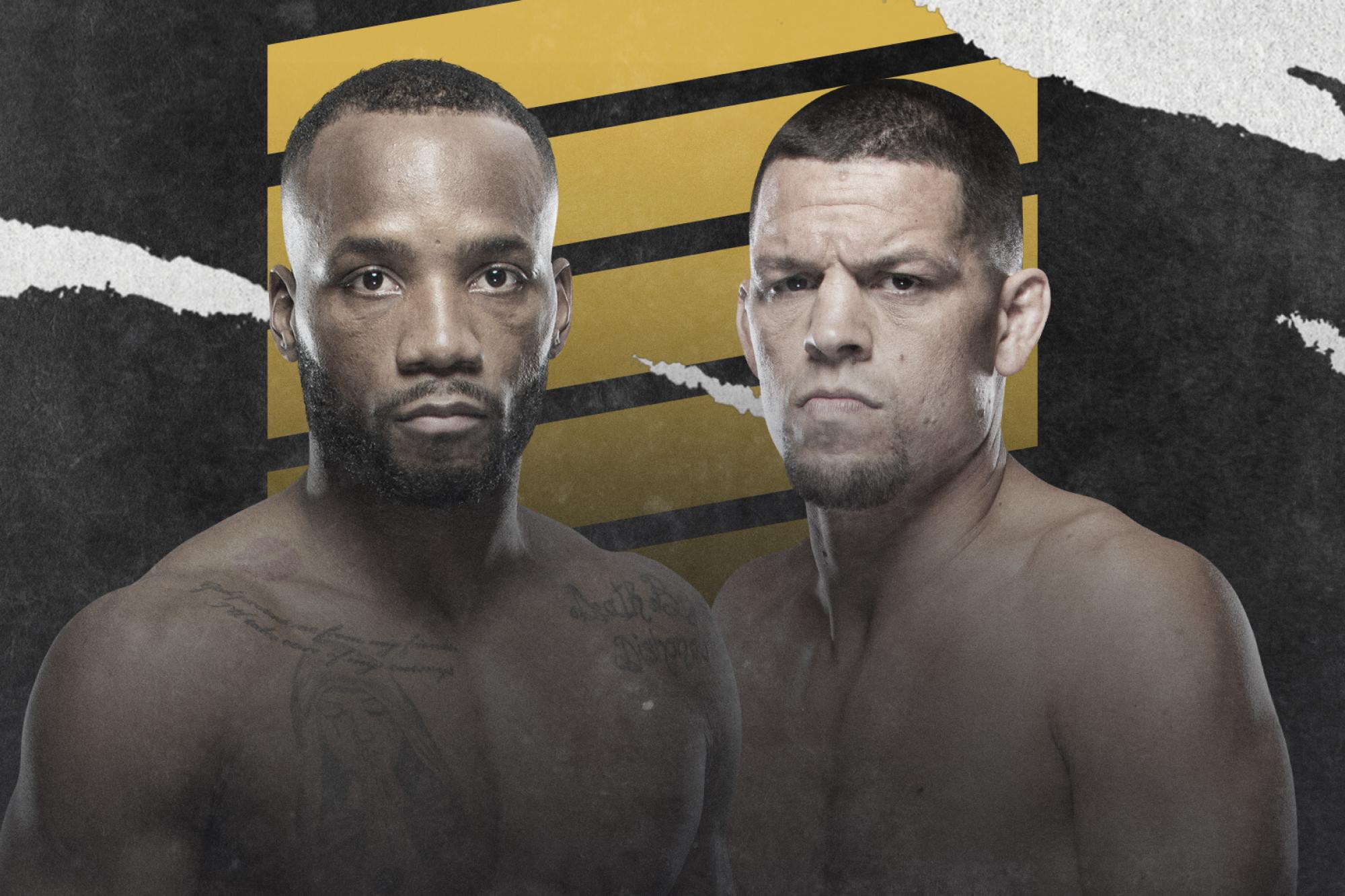 It is always a spectacle when Nate Diaz steps into the ring. We have not seen Diaz since his doctor’s stoppage loss to Jorge Masvidal in 2019, and Leon Edwards has also only been in the cage for one round since 2019.

Leon Edwards (18-3) has had some bad luck. He has had countless fights canceled, and when he finally got into the ring against Belal Muhammad, the fight ended early in the second round due to an eye poke.

Leon is on an 8 fight win streak, with his last loss coming to the current champ Kamaru Usman in 2015. Edwards has never been stopped before but only has finished 50% of his wins. Edwards is effective to the body, but we have not seen him in so long it is going to be interesting to see what style he employs. My guess is he is going to want to keep it on his feet.

Diaz is extremely dangerous on the ground with his amazing submission game. Edwards is going to have to be careful if he gets a knockdown not to dive into Diaz’s guard.

This is going to be interesting to see if Diaz still has what it takes to win against high-level opponents. If Diaz is as focused and as healthy as he says he is, there is some value in betting on him. Diaz will have the entire crowd behind him, and both guys have some rust to shake off. This pick is a long shot, but I am going to go with the Stockton Kid.

Vincent Graziano
I currently attend the University of Miami; pursuing a BSBA in Business Analytics with a double minor in Sports Administration and Finance. I live in Middlebury, Connecticut. I am a member of the Data Analytics Student Association at UM. I am currently employed as a caddy at the Country Club of Waterbury. My interests include all sports, especially golf football and mixed martial arts. I am also currently in the process of creating my own golf merchandising company.
You might also like
MMA Pickssports bettingBoxing/MMA
MORE
Read More
64 Euro 2020 Belgium vs Russia Prediction
Next