McGregor vs Poirier Trilogy Will Determine the Future of MMA McGregor vs Poirier 3 may very well be the biggest fight in UFC history. Conor McGregor is the biggest star we have ever seen in mixed martial arts. Out of the top ten most-watched UFC events, McGregor fought in seven of them. McGregor’s last fight against Dustin Poirier ranked second all-time in pay-per-view buys. With both fighters holding a 1-1 record, this fight will settle their rivalry once and for all.

McGregor vs Poirier I

Coming into the first fight, Conor was undefeated in the UFC and 15-2 overall. Dustin was 16-3 in his MMA career and was expected to be McGregor’s biggest competition up to that point in his career.

McGregor was popular for his trash talk and brash behavior. However, he was able to back it up by constantly knocking out his opponents. Many people have awarded McGregor with the title of best trash talker in sports. He constantly finds his way into the head of his opponents and speaks things into existence.

Poirier seemed to be unphased in the lead-up to the fight. He was confident and seemed to be worried about his own game rather than that of his opponent.

McGregor clipped Dustin early in the first round and proceeded to put him away with hammer fists after Dustin was knocked to the canvas. McGregor looked like the sharper striker, and Poirier looked like a deer in headlights which is how he described himself after the fight. The win put the division on notice. Conor let everyone know he was the real deal.

After the fight, both fighters’ careers took off on very different paths. McGregor continued his meteoric rise, and Poirier had to rebuild.

McGregor was already a massive superstar, and it only took him one more knockout against Dennis Siver to earn him a title shot. McGregor was scheduled to fight Jose Aldo, but Aldo pulled out, forcing Conor into an interim title fight with Chad Mendes.

After knocking out Chad in a tough fight, McGregor delivered the fastest KO in title fight history against Jose Aldo in one of the biggest fights in UFC history. Aldo looked extremely nervous when he stepped into the cage. McGregor was in his head and did quick work of Aldo, who was considered one of the top pound-for-pound fighters in the world. 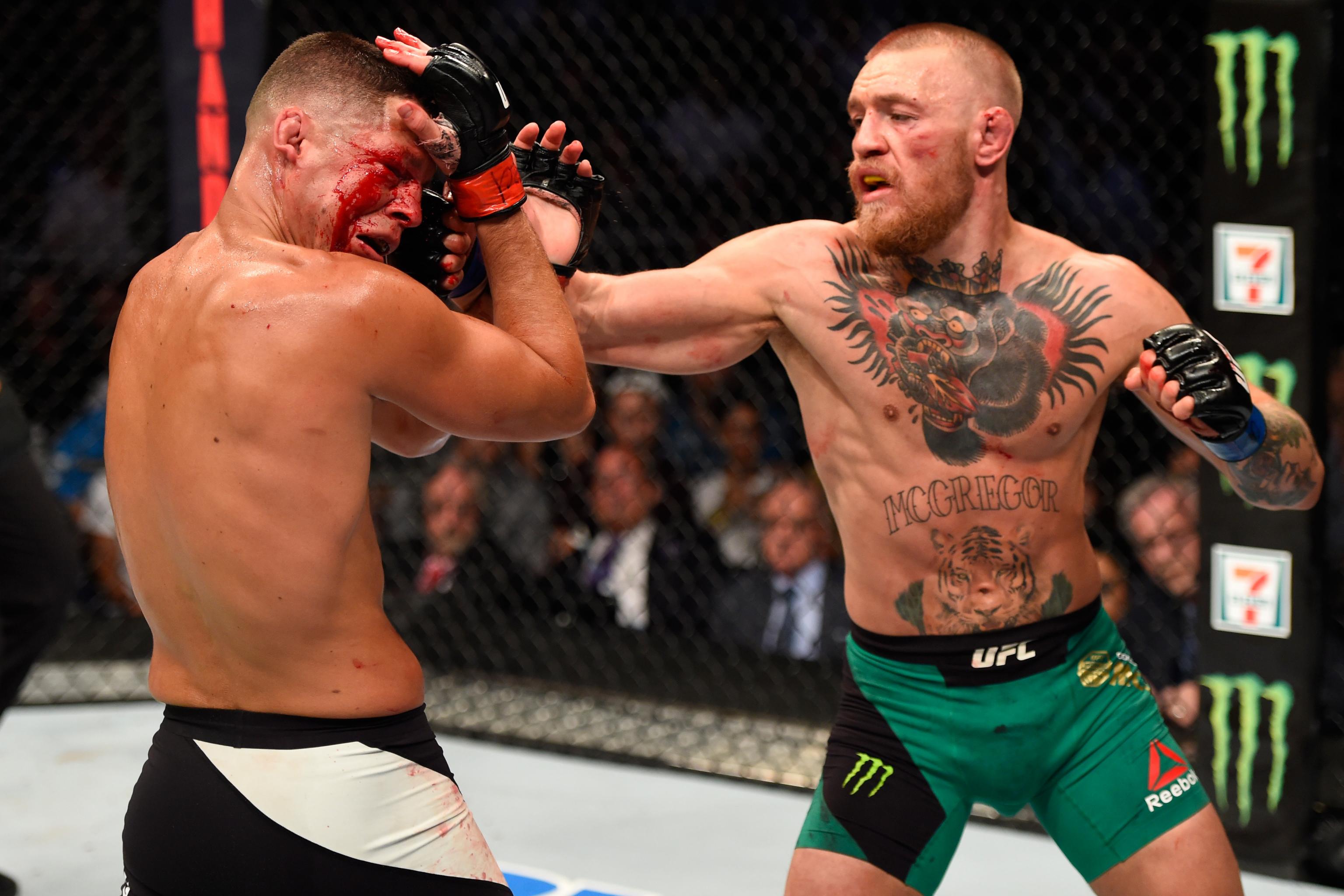 Conor McGregor accepted the defeat but refused to give up. He immediately asked for and was granted a rematch against Nate Diaz, where McGregor won by decision.

Conor did not stop there. He decided to move up 2 weight divisions to face another fan favorite, Nate Diaz. Conor alone was a huge money fight for the company, but adding Diaz into the equation just made the fight 10 times bigger.

McGregor was not able to break into the head of Nate Diaz and was submitted in the second round by a much heavier and more advanced grappler. It was apparent Conor was by far the classier striker, but his gas tank did not hold up well against Diaz’s constant pressure.

However, Conor accepted the defeat but refused to give up. He immediately asked for and was granted a rematch against Diaz. After training extremely hard, McGregor came back and beat Nate Diaz by decision in a fight where he knocked down Diaz 3 times.

Once again, McGregor was not satisfied. He wanted more. Just a month and a half after the grueling fight against Diaz, McGregor found himself across from the lightweight champion Eddie Alvarez. Conor made quick work of Eddie as well and became the first UFC fighter to simultaneously hold belts in two weight divisions.

McGregor sought out a new opportunity to fight the greatest boxer of all time, Floyd Mayweather. He was defeated by Floyd in a respectable performance.

After McGregor boxed Mayweather, there was a feud that just about everybody in the world knows about. Conor threw a hand truck through a bus window in an all-out assault on Khabib Nurmagomedov. Conor was arrested and the feud between the two boiled.

Conor made his return to the octagon against who many consider the greatest pound-for-pound fighter of all time. He had not been in the octagon in 2 years. I would have liked to see Conor get some more time in the octagon to shake off the rust before taking on such a tall task.

After the loss, Conor disappeared for another two years. He finally returned against Cowboy Cerrone and defeated him in spectacular fashion, and let everyone know he was back and was not going anywhere.

While McGregor was making history, Dustin continued to grind away, earning victory after victory. After his loss to Conor, Dustin went 8-1 and earned himself an interim title shot against Max Holloway.

Dustin put forth a dominant performance beating Holloway 49-46 on all three judges’ scorecards.

However, Dustin then had to face the undefeated champion Khabib Nurmagomedov. He was submitted by Khabib in the 3rd round. Dustin did not let the loss get the best of him, and he went on to win his next bout against Dan Hooker.

This win led him back to a rematch with McGregor.

After 7 years, the two men crossed paths again. Before the fight, Poirier admitted he had let McGregor’s antics get to him in the first fight. This time he did not have to deal with it. Conor took a different approach this time around.

Conor was very pleasant and humble leading up to that fight. Many people say he lost because he was missing that fire, the edge that sets him above his competition. The 2nd contest was an amazing bout. McGregor stunned Dustin in the first round. In the second round, the leg kicks Dustin was landing on Conor began to add up, and Conor was on wobbly legs.

Conor had his back to the fence, and Dustin began to tee off. He knocked him down with a right cross and finished the job with a straight right with Conor on the canvas.

After the fight, McGregor was humble in defeat. Dustin was also humble in his win. Immediately after the fight, Dustin put up his fingers, showing it was 1-1, signifying the two would meet again.

Soon after the fight, Dana White announced the trilogy. McGregor gave lots of props to Dustin and acknowledged he had changes to make.

Dustin may have given McGregor the fire he needed a few weeks after the bout. Dustin tweeted, stating Conor did not donate to his organization as he promised before the fight. This angered Conor, who fired back tweets calling Dustin a hillbilly and promised to knock him out in the trilogy.

Lots of people think this may be what Conor needed to get back to the edge he once had. I would not be surprised to see Conor back in his element, talking trash to Dustin leading up to the fight.

This fight will alter the history of MMA. Conor is one of the biggest stars in all of combat sports. With a loss here, we may never see Conor fight for a title or maybe even fight at all. He has all of the money he could ever need, and he would have lost 3 out of his last 4 bouts. Might this be how Conor is remembered? Would he go out on a losing streak? Time will tell.

Dustin is also fighting for his own legacy. He could become one of the biggest stars in the sport. He became the first man to knock out Conor. Could he do it again? This fight has so much on the line. Both fighters’ reputations and careers may very well be on the line on July 10th. Can Conor get back to his winning ways and build on his already amazing legacy?

July 10th is going to be the biggest fight in MMA history. Tune in to see which fighter comes out on top.

Vincent Graziano
I currently attend the University of Miami; pursuing a BSBA in Business Analytics with a double minor in Sports Administration and Finance. I live in Middlebury, Connecticut. I am a member of the Data Analytics Student Association at UM. I am currently employed as a caddy at the Country Club of Waterbury. My interests include all sports, especially golf football and mixed martial arts. I am also currently in the process of creating my own golf merchandising company.
You might also like
sports bettingSports
MORE
Read More
14