James Harden Moves up to 6th All-Time in Made Threes In his last playoff game, 2018 NBA MVP and Brooklyn Nets guard James Harden drilled four of his eight 3-pointers during his team’s 130-108 blowout victory over the Boston Celtics on Tuesday night, as he moved into sixth place on the all-time 3-pointers made list in NBA Playoff history, passing Reggie Miller. He is just one three behind Manu Ginobili for fifth all-time.

Any time Harden is behind the arc and takes a couple of dribbles between his legs, it becomes a pretty safe bet that he’s going to let it fly, as he has mastered the art of the stepback 3-pointer.

Harden shoots 33.1 percent from behind the arc for his career in the playoffs, as much of his playoff success came with the Houston Rockets. He was in the MVP conversation year in and year out while leading the team to deep playoff runs on multiple occasions, but he didn’t quite have enough to overcome the likes of the Golden State Warriors out West.

For the Brooklyn Nets, Harden has taken significantly fewer 3-point attempts, as he’s been more focused on running the offense as the primary playmaker and setting up his teammates outside of Kevin Durant and Kyrie Irving for great looks, as it’s also important to set your role players up for success throughout the course of an entire 48-minute game. 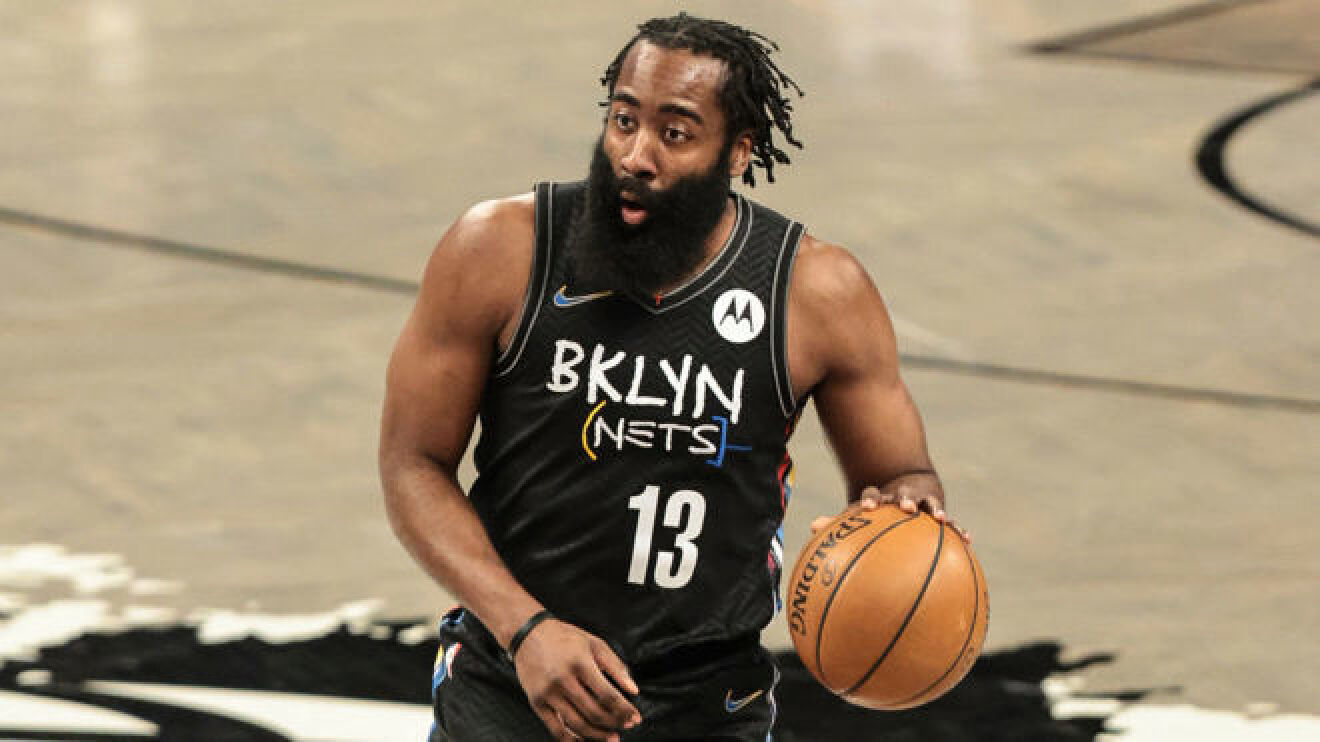 Harden has taken significantly fewer 3-point attempts, as he’s been more focused on running the offense as the primary playmaker and setting up his teammates outside of Kevin Durant and Kyrie Irving for great looks. (File photo)

With him embracing a new role in the Nets’ offense, his field goal percentage is up quite considerably, as are his assist numbers, as he’s been tasked with having the ball in his hands most of the time but also allowing Irving and Durant to hunt for their shots as they see best fit.

In order for the Nets to win it all this season, it will be important for Harden to continue to be the primary ball handler and pick his opportunities to score at the best possible moment, as his ability to take defenders off the dribble and pull up at any time makes him a dangerous man to guard on a nightly basis. If he gets you off balance, he will draw a foul and head to the line for an easy two or three free-throw attempts.

Nets are heavily favored to win the 2021 NBA championship

The Nets currently have the best odds to win the NBA championship, as they sit with +185 odds to win it, with the Los Angeles Lakers being the next favored team to come away with the Larry O’Brien Trophy this summer.

It’s a pretty safe bet that the Nets will be able to come away with the championship this year, as there is just too much star power on their roster in addition to so many great role players who just know exactly how to perform to the best of their abilities out there that translates into winning basketball.

In his first two full months as a Net, Harden lit the world on fire, as he won two consecutive Eastern Conference Player of the Month Awards and carried the team through a long stretch of time in which Durant was out due to a hamstring injury. Harden dealt with a hamstring injury as well, but he’s seemed to have shaken that off.

Sameer Kumar
From the greater New York City area. Big fan of sports and love breaking down a wide range of topics in the sports world such as rumors, analysis and also love to share the stories of athletes and how they got to where they are. In my downtime, I love to travel, try new things, read, listen to music, and spend time with those who matter most to me most.
You might also like
brooklyn netsJames HardenNBA PicksNBA Playoffs
MORE
Read More
5