Harrah’s Cherokee Casino, one of the best gaming locations in North Carolina, is undergoing a massive expansion. The addition to the casino is scheduled to be complete by the fall, according to the tribe.

The expansion to the property is going to take Harrah’s Cherokee Casino to the next level. There will be an enhanced World Series of Poker Room, an upgraded sportsbook, a 19 story, 725 room hotel, an 83,000 square foot convention center, and many minor improvements when the construction is finished. 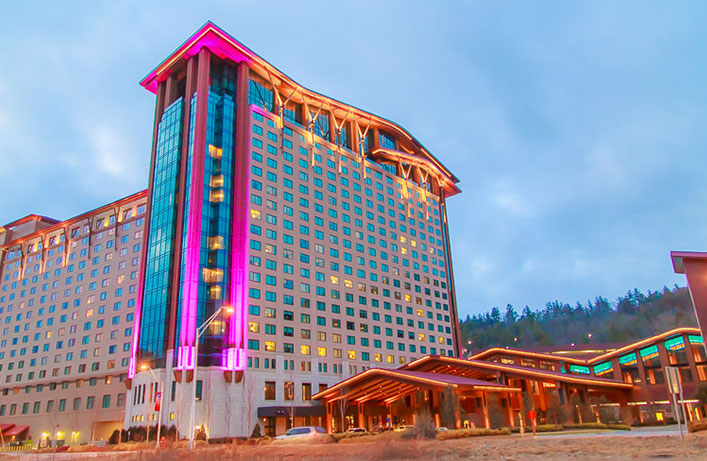 The casino looked forward to welcoming casino frequents and new visitors to enjoy the latest amenities on the property. Brooks Robinson, Regional Senior VP and GM for Harrah’s Cherokee Casinos noted that this is just the beginning of planned enhancements in coming years.

“This expansion has been an integral component to our property and community’s growth and helps us further show that Harrah’s Cherokee Casino Resort is truly a destination that is unlike any other in the Carolinas. We look forward to welcoming both new and returning visitors to see the results of this project.” – Brooks Robinson

The Book at Harrah’s Cherokee Casino opened in March, and it’s already an elaborate property. When it’s finished being upgraded, people will want to wager at the property exclusively.

The book has three private fan caves with a massive 85” HDTV and multiple 43” 4K screens. These books are prevalent for events like birthdays and bachelor parties.

The book features a 90’ screen that displays multiple games, so you will never miss any action. In addition, there is comfortable seating throughout the book and numerous betting kiosks.

The sportsbook and the enhanced poker room are a combination that many casinos in the United States cannot offer. Although, there is a tribe in the state that is trying to derail the Eastern Band of Cherokee’s dominance in the gaming space.

Legal Battles on the Horizon

The Eastern Band of Cherokee Indians has new gaming competition in the state. The Catawbas are building a new temporary venue in the state.

There are also future plans for the tribe to construct a $273 million resort in Kings Mountain. This property would draw people away from Harrah’s Cherokee Casino, so the tribe is trying to stop construction before it progresses.

The Cherokee tribe believes that the United States Department of the Interior broke federal law to approve the Catawbas’ new property.

Principal Chief Richard Sneed stated, “the US Department of Interior violated law in authorizing the Catawba casino, and our appeal is simply the next step in the process to ensure that justice is done.”

It’s unlikely that the legal battles will go in favor of the Cherokee tribe. However, it’s the group’s only chance to limit gaming competition in the state.

Tanner Kern
Tanner Kern is a former Division I football player at Lafayette College and a graduate of the University of Connecticut. He is currently a writer for USA Wager and the Sports 2.0 Network. He also contributes on knupsports.com, baseballspotlight.com, basketballarticles.com, footballtakes.com, bettingblogger.com! You can connect with Tanner over on Twitter @tannerkern_.
You might also like
Industry
MORE
Read More
5 The NL West – A Battle of Three
Next