The New York State Gaming Commission (NYSGC) members ruled a unanimous 5-0 verdict on May 17 to revoke Linda Rice‘s training license effective immediately for three years and fined her $50,000 for “improper and corrupt conduct in relation to racing.”

Last November, the commission had accused Rice during a hearing of paying New York Racing Association officials to get “regular, continual and improper information,” such as expected entries and past performances, mostly from racing clerk Jose Morales Jr.

Linda Rice admitted to making payments to Jose Morales, Jr., whom she’s known since he was a child but insisted that the payments were loans, not rule violations.

“At the time, I knew he was struggling, having some problems. I thought, ‘well, it’s going to take him a little time to get it back,” Rice said of Morales, who she claimed never paid back her initial loan.

Rice, the first woman to earn Saratoga’s leading trainer title in 2009. She also admitted to paying to the racing office, gate crew, and others at tracks.

“I wrote each of them [the racing office employees] a $200 check and a thank you note,” Rice said of her first gratuity in 2009, after which she switched to cash because of ease of payment. “It was very labor-intensive getting all the names and all the spelling and everything.” 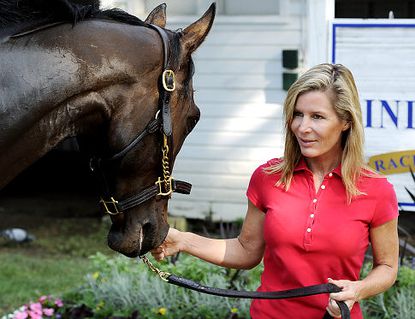 The New York State Gaming Commission mentioned in a tweet that it received a report from the Hearing officer on April 13.

“The report concluded that Ms. Rice’s misconduct involved receiving and request for confidential entry information in overnight races was intentional, serious and extensive. It also concludes that her actions constituted improper and corrupt conduct in relation to racing in violation of NYCRR 4042.1 and were inconsistent with and detrimental to the best interests of horse racing,” according to the NYSGC.

NYSGC chairman Barry Sample noted that commission members agreed with the penalty recommended by hearing officer Clark Petschek, “but modified the report to specifically reflect that the hearing officer found multiple violations,” which was a determination in the board fining Rice above the $25,000 per-violation penalty guideline in the state’s racing rules.

Linda Rice began her training career in 1987. Her lifetime record is 2,107 victories from 11,382 starts, with an accumulated career earnings of $85.8 million.